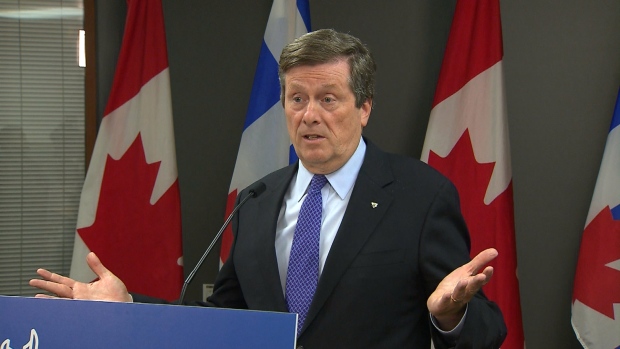 Mayor John Tory says he is using a three-day trade mission to the Silicon Valley to sell technology companies and venture capitalists on the benefits of setting up shop in the Toronto-Waterloo corridor.

Tory, Kitchener Mayor Berry Vrbanovic and representatives from a number of Ontario technology-based companies have been in California since Monday.

So far, the leaders have met with a number of technology companies, including Google, Facebook and Salesforce, while also talking time to speak with Canadian ex-pats who left home to work in the technology sector south of the border.

The Toronto-Waterloo corridor is the second largest centre for technology companies in North America behind the Silicon Valley but Tory told CP24 that local leaders haven’t done enough in the past to promote the region as a destination for established technology companies and startups.

The mayor said that the Toronto-Waterloo region “has lower taxes and substantially better” tax incentives for companies dealing in research and development, not to mention a high number of educational institutions and a “quality of life that is second to none.”

Tory also said that things like universal medical coverage and paid paternity live can be a big incentive for workers that would otherwise be plying their trade in the U.S.

“For all the problems we have with both traffic and the cost of housing, those problems are even bigger here,” Tory said of the Silicon Valley. “The traffic is worse and the housing is more expensive so we are saying to people that there is still an advantage to be working in Toronto in terms of cost of living and transportation and we are saying to companies you can do very well with the taxes we have in Toronto and with your dollar going further.”

Before leaving California, Tory will meet with San Francisco Mayor Ed Lee to learn about that city’s Office of Civic Innovation in which technology companies work with municipal staff to address local issues.

Tory will then head to China and Japan for a 10-day trade mission that will kick off on Thursday.

“We are going there again to tell the Toronto story. One thing I have discovered is that if we don’t tell the story of Toronto ourselves, nobody is going to do it for us,” Tory said.