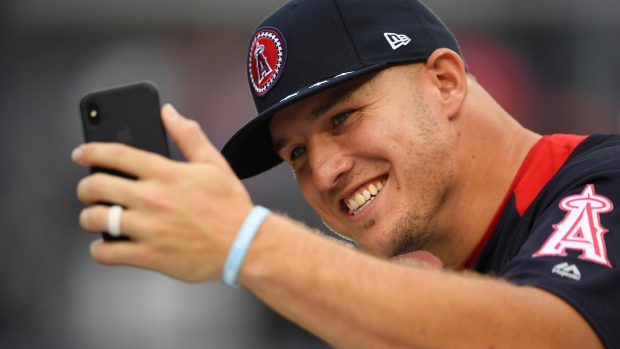 FILE - In this July 16, 2018, file photo, American League All-Star Mike Trout, of the Los Angeles Angels, takes a photo on the field ahead of the All-Star Home Run Derby at Nationals Park in Washington. A person familiar with the negotiations tells The Associated Press Tuesday, March 19, 2019, that Trout and the Angels are close to finalizing a record $432 million, 12-year contract that would shatter the record for the largest deal in North American sports history. (AP Photo/Patrick Semansky)

ANAHEIM, Calif. -- Mike Trout and the Los Angeles Angels announced their $426.5 million, 12-year contract on Wednesday night, a record deal that ties baseball's top player to the Orange County club for what likely will be the rest of his career.

He cannot be traded without his consent and gets a hotel suite on road trips. He also receives four Diamond Club tickets plus a luxury suite for 20 games this year, and for the remainder of the contract by each Jan. 2 he can pick either the Diamond Clubs tickets or the suite dates for that season.

The Angels will celebrate with a public appearance by Trout outside Angel Stadium on Sunday when the team returns from spring training for the first of three exhibitions against the Dodgers. Fans are invited to welcome home the two-time AL MVP, who already ranks among the most accomplished players of his generation.

"This is where I wanted to be all along," Trout said in a statement. "I have enjoyed my time as an Angel and look forward to representing the organization, my teammates and our fans for years to come."

"This is an exciting day for Angels fans and every player who has ever worn an Angels uniform," Moreno said. "Mike Trout, an athlete whose accomplishments have placed him among the greatest baseball players in the history of the game, has agreed to wear an Angels uniform for his entire career."

Trout's $35.5 million average annual value surpasses pitcher Zack Greinke's $34.4 million in a six-year deal with Arizona that started in 2016. Trout will set a baseball record for career earnings at about $508 million, surpassing the roughly $448 million Alex Rodriguez took in with Seattle, Texas and the New York Yankees from 1994-2017

Trout had been due $33.25 million in each of the next two seasons under his previous deal, a $144.5 million, six-year agreement. That was superseded by the new agreement, which keeps him under contract to the Angels through the 2030 season, when he will turn 39.

Trout had never shown any public interest in leaving the Angels, who drafted him late in the first round in 2009 and fostered his development. But his lifelong ties to the Philadelphia area and the Angels' on-field struggles provided ample fodder for fans wondering whether Trout would leave after his contract expired.

The Angels have made the playoffs just once in Trout's seven full big league seasons, which coincide with Albert Pujols' seven-year tenure with the Halos. They were swept by Kansas City in that Division Series in 2014.

Los Angeles also is coming off three consecutive losing seasons for the first time since 1992-94, but the Angels' progress under general manager Billy Eppler was enough to persuade Trout to take the deal.

The Angels now have two impressive cornerstones in place with Trout and AL Rookie of the Year Shohei Ohtani, who will return as their designated hitter at some point this season. Ohtani won't pitch until 2020 after undergoing Tommy John surgery, but the 24-year-old two-way star is tied to the Angels for at least five more seasons.

"I'm really happy and excited to play with such a great player for a long time," Ohtani said through an interpreter. "If anyone deserved such a big contract, it's Mike."