While others stumble, Toronto FC continues to find its feet at MLS tournament 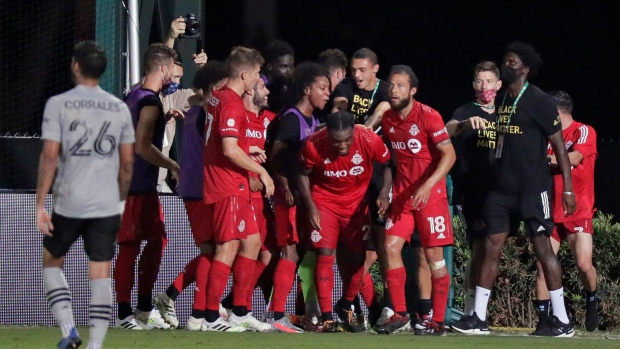 Toronto FC forward Ayo Akinola, center, celebrates with teammates after scoring his third goal of the game during the second half of an MLS soccer match the Montreal Impact, Thursday, July 16, 2020, in Kissimmee, Fla. (AP Photo/John Raoux)

While New York City FC and Atlanta United were No. 1 and 2 in the Eastern Conference last season, they sit bottom of their groups at the MLS is Back Tournament.

The MLS champion Seattle Sounders could thank the Vancouver Whitecaps for keeping them out of the Group B basement prior to their meeting Sunday night.

“It's a little surprising because those are teams that have been very consistent over the last few years,” said Toronto FC coach Greg Vanney. “But having what has transpired over the last several months leading into an event like this, there's always teams - even in World Cups - that don't quite perform maybe as you had expected for one reason or another.

“Those are good teams and I think over a long season they would prove that they're good teams. This (tournament) is a very short season, in a way,” he added.

Toronto, in contrast, has already found its feet. And while still a work in progress, it has shown resilience and a deft scoring touch despite missing star striker Jozy Altidore as he works his way back to full fitness.

The MLS Cup runner-up started well against D.C. United, only to cough up two late goals in a 2-2 tie. Then it dispatched Montreal 4-3.

Toronto takes on the New England Revolution on Tuesday morning with both teams knowing a win means finishing atop Group C. A draw opens the door to D.C. United, which could then climb into first with a victory over pointless Montreal later Tuesday.

With tournament group games counting in the regular-season standings, there is an added incentive to notch another win Tuesday.

The pluses for Toronto include 20-year-old striker Ayo Akinola, whose five goals were more than 20 of the 24 teams at the tournament had going into play Sunday.

Spanish playmaker Alejandro Pozuelo had a hand in all of Akinola's goals and is developing a promising rapport on the right side with Brazilian fullback Auro and Argentine newcomer Pablo Piatti.

Captain Michael Bradley, coming off ankle surgery, has looked rejuvenated at the heart of the Toronto midfield.

The minus is Toronto has conceded five goals in two games. Only the Los Angeles Galaxy, with eight, had conceded more prior to Sunday.

Vanney says his team got disconnected on defence late against D.C. United and Montreal.

“Our timing of when we're trying to move together as a group and control things defensively hasn't been great,” he conceded.

He points to rust, from the lengthy pandemic-related hiatus prior to the tournament, and the oppressive conditions in Florida. That means the team isn't dealing with problems as a unit, with individuals having to step up to deal with situations - with varying degrees of success.

“I think guys are naturally trying to find little moments where they can kind of catch their breath and deal with the heat and the humidity and the fatigue factor of our games coming quickly. Guys are resting at the wrong times ... We're getting a little disconnected on the defensive side.”

Vanney said he is trying to maintain some continuity in his lineup “because I think our group still needs to mould together here a little as this event continues, if we're going to have a chance to win it.”

Still Vanney likes the way his team has gritted it out through the tough times. “And we've obviously had some very, very good moments with those games.

“But we're still working towards that collective 90-minute game that we've haven't hit yet. Not many teams have.”

The top team in Group C advances to the round of 16 against one of the four best third-place finishers next Sunday. The runner-up plays next Saturday against the second-place team in Group A, either Orlando City or the Philadelphia Union.

New England defeated Montreal 1-0 before settling for a 1-1 tie with D.C. United.

“We gave the game away,” Revs coach Bruce Arena said of the D.C. United match, lamenting his team's inability to finish.

The Revolution conceded the tying goal in the 72nd minute when Federico Higuain pounced on a short back pass by Slovenian international defender Antonio Mlinar Delamea.

Spanish star playmaker Carles Gil left the game in the 72nd minute. Arena said he is dealing with the same foot injury he has had since the pre-season.

Vanney says midfielder Jonathan Osorio (quad) and Altidore are making progress but seemed to suggest minutes off the bench would be a best-case scenario Tuesday.

The game is a 9 a.m. ET start, the second early kickoff for Toronto and first for New England at the tournament.