BERLIN - Syrian-born poet Adonis has become the first Arabic-speaking author to receive one of Germany's most prestigious literary awards, the Goethe Prize of the city of Frankfurt.

The 81-year-old Adonis accepted the award on Sunday in Frankfurt.

Born Ali Ahmad Said in northern Syria, Adonis fled his homeland for political reasons as a young man. He now lives in Paris but still writes in Arabic.

The jury praised Adonis for bringing modern European ideas and critical thinking into current Arab culture by using classic poetic images based in the traditions of Arabic poets.

The Goethe Prize, worth C50,000 ($72,000), is awarded every three years on Goethe's birthday to someone whose works are deemed to reflect the spirit of the German literary giant.

The Goethe Medal is given to artists who support the German language in an extraordinary way.

Johann Wolfgang von Goethe is considered one of Germany's greatest authors. He was born on Aug. 28, 1749, in Frankfurt and wrote poems, plays and novels, now considered classics of German literature. 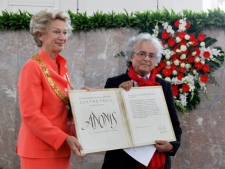