TCDSB trustees vote to sing, give bottles the boot

Students will continue to sing, but bottled water has gotten the boot following a vote Thursday night.

Trustees with the Toronto Catholic District School Board have voted in favour of a motion requiring students to sing the national anthem a capella.

School board members were considering the motion from trustee Angela Kennedy, who wanted kids to sing O Canada to make sure they know all the words.

Kennedy said she filed the motion because she believes students are just listening to the anthem when a recording is played in class at the start of every school day or at public gatherings, including graduations ceremonies.

She wanted the rules to be changed so students will have to sing O Canada without the music at the start of the school day.

School board members were also considering a proposal from trustee Maria Rizzo to ban the sale of bottled water on TCDSB property, including school cafeterias and vending machines, starting in September.

Board members voted 9-2 in favour of banning the bottles shortly before 11 p.m.

Rizzo had argued that bottled water is not any safer or healthier than Toronto's water supply, and suggested children would learn a valuable lesson about recycling by bringing reusable containers to school. 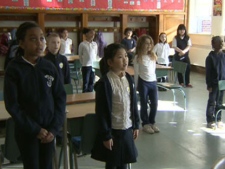