OTTAWA - Canada has added climate change to the G8 agenda after coming under pressure from world leaders and environmentalists.

A spokesman for Prime Minister Stephen Harper confirmed Monday that climate change will be on the table at both the G8 and G20 summits.

"We anticipate that climate change will come up, in fact, at both summits," Andrew MacDougall said.

"Actually, the prime minister was on (the telephone) with Chancellor (Angela) Merkel this morning of Germany and they discussed the fact that this issue, climate change, will be raised at both summits."

Leaders from the European Union, Mexico and the United Nations have been calling on Canada to put climate change on the to-do list when it hosts summits in Huntsville, Ont., and Toronto this month.

The Tories have made it clear the summits will focus on the economy. Harper suggested last month that all other issues are "sideshows."

But last week the prime minister said he and his G20 counterparts will talk about climate change at the Toronto summit.

"Obviously, a lot of subjects will be discussed, including some issues surrounding climate change," Harper said in the House of Commons.

Countries are busy negotiating a global-warming pact ahead of the next UN climate summit in Mexico this December. It's hoped that summit will seal a tentative deal reached last year in Copenhagen.

Mexican President Felipe Calderon stressed the urgency with which climate change must be addressed during a visit to Ottawa last month.

"In Mexico, we cannot wait. We cannot wait for the developed countries to make a decision," Calderon said at a news conference with Harper.

"Some of them, like the U.S., could take another eternity to decide on what they had decided since the Kyoto Protocol."

Harper has suggested a better venue for global-warming talks is at the UN.

"In the past, there have been discussions of the climate change issues at the G20 for the purpose of trying to assist, not replace, the United Nations process," the prime minister said last week.

"Of course, as I indicated to President Calderon during his visit, we will continue the same practice here."

Environmentalists have also been pushing the Conservatives to make climate change a priority at the G8 and G20 meetings.

A coalition of environmental groups noted Monday that African leaders -- whose countries could be hard hit by climate change -- have been invited to the G8 as observers, so not discussing the issue would be a "slap in the face."

Over the weekend Canada invited Algeria, Egypt, Ethiopia, Malawi, Nigeria, Senegal and South Africa to attend a special session at the summit. Haiti, Jamaica and Colombia are also on the guest list.

"If we invite those people and we don't talk about climate change, it pretty much amounts to a slap in the face," Steven Guilbeault of Equiterre said.

"Because they are bearing the brunt of the impact of climate change. They are suffering the most."

Guilbeault and others from the Climate Action Network said the gathering of the leaders of some of the world's wealthiest nations is a prime place to discuss global warming ahead of the UN climate talks in Mexico.

"Meetings like the G8 and like the G20 can have significant political importance when it comes to high-level agreements between heads of state and heads of governments to help further the negotiations on climate change, and help bureaucrats and negotiators move towards agreement," Guilbeault said.

The environmentalists were also critical of the Tories for not holding a meeting of G8 environment ministers ahead of the summit in Huntsville, Ont.

They say it's the first time since 1994 that environment ministers have not met ahead of a gathering of the world's wealthiest nations. 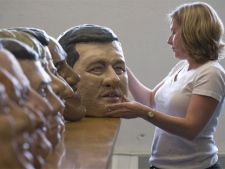