Tornado destroys homes of 50 families in Midland; 8,000 without power

MIDLAND, Ont. - Close to 50 families lost their homes in a tornado that cut a path of destruction through Midland, Ont., but remarkably left only a handful of residents with minor injuries.

The families have been taken in by friends and relatives, while the community continues to be in a state of emergency, Mayor James Downer said Thursday.

"This situation is very grave, but out of it came some good," Downer said at a news conference.

"It holds your community together. It brings your neighbours in. And it shows you what kind of people we work with."

Smith's Camp, a trailer park in the heart of Midland, was hit by the storm shortly after 6:30 p.m. ET Wednesday -- just hours after central Canada was shaken by a moderate earthquake.

More than 8,000 people were without power in the aftermath, but hydro officials said only about 900 customers remained without power by late Thursday.

However, no timeline has been set for the cleanup and recovery process.

Police blocked the main thoroughfare where most of the damage occurred, but locals slipped past the blockades to get a peek at the destruction.

Trees that were slammed against hydro poles lay splintered along the sidewalks. A transport truck trailer was flipped on its side. The roof of a shed was wrapped around the top of a tree.

Rick Bartolucci, Ontario's minister of community safety, toured the devastation and said the province is assessing the need for emergency relief funds.

Although people were in a state of shock, Bartolucci said residents were "very, very resilient people."

A team is being sent to assess the disaster, and Bartolucci said the province will be a part of the "co-ordinated effort" to help Midland get through the disaster.

The Insurance Bureau of Canada had set up shop next to the Red Cross at a local community centre.

Downer said he will not lift the state of emergency until he is sure everyone in the community is safe. The damage caused by the storm will cost $10 million to $15 million to repair, he said.

Police said nine people were injured when the tornado hit.

Environment Canada confirmed that the severe storm that moved through central Ontario spawned at least one tornado that touched down in the Midland area.

"There's also a possibility some of the damage that we may come across will be have been caused by downbursts or violent localized gusts of wind," said meteorologist Geoff Coulson.

"There may be other damage, whether tornadic or due to these downburst winds, in different parts of south-central Ontario."

Trailer park resident Ian Ferguson thought it was just another passing storm, until the rising winds made him bolt towards his bathroom for cover.

Before he could get there, something slammed into his trailer.

He stumbled outside, and realized how fortunate he had been. Two doors down a trailer was flipped on its side.

A neighbour stumbled by, apparently in shock and oblivious to what was happening.

"I walked out of there alive. The person next to me could have been dead."

There was a great deal of uncertainty Thursday about when, or if, residents of Smith's Camp will return home.

"I only have the clothes I'm wearing," Ferguson said. "Let's face it, yesterday I had a place to live. Today I have to move."

Traffic heading into Midland was being diverted toward the nearby town of Tiny. Along the road, signs remained flipped and twisted. 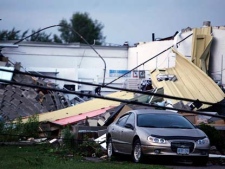 A car sits in front of a damaged building in Midland Ontario, Wednesday June 23, 2010 after a severe storm harbouring a suspected tornado tore through the town. (Benjamin Ricetto/THE CANADIAN PRESS)