The city is paying thousands of dollars to repair at least seven TTC shelters that were smashed during a vandalism spree early Tuesday morning.

The suspects smashed the glass walls of several bus shelters along Eglinton Avenue between Kennedy Road and Kingston Road in Scarborough, starting as early as 1:30 a.m.

Toronto police are investigating whether the glass was shot out with a pellet gun. Officers were called to the area when a TTC employee reported hearing gunshots.

Police spokeswoman Const. Wendy Drummond told CP24 that investigators so far haven't been able to locate any projectiles from a pellet gun, so they're not sure what type of item or object was used to smash the glass.

Investigators haven't made any arrests.

No description of the suspects was publicly released, but police are canvassing businesses for surveillance footage to try to identify the suspects or a vehicle.

"Malicious" is how Drummond describes the destruction of bus shelters that are meant to protect TTC riders from the elements.

"It's senseless. It really is," she says.

Meanwhile, crews are surveying the damage. It may cost the city about $5,600 to $7,200 to replace the glass, a city spokesman says.

Anyone with information about the vandalism or the suspects is asked to call police or Crime Stoppers.

With a report from CP24's Sue Sgambati 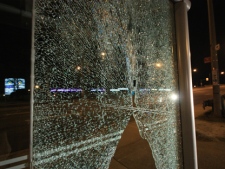 One of several bus shelters that were destroyed along Eglinton Avenue early Tuesday, April 19, 2011. (CP24/Tom Stefanac)