TORONTO - The violent Black Bloc protest tactic that has been deployed at summits for decades reared its ugly head again during Toronto's G20 protest on Saturday.

A small mob of protesters using the destructive strategy turned an otherwise peaceful G20 demonstration into the most violent outburst the city had ever seen.

Police cars were set ablaze, the windows of banks were shattered with hammers and bottles were thrown at riot police.

The Black Bloc strategy is this: show up at large demonstrations and attack symbols of capitalism. The hope is that police will react, while the protesters shed their black clothes and melt into the crowd.

"It's more of a philosophy or an approach, or actually I suppose the most accurate term is an extreme sport," said security expert John Thompson, of the Mackenzie Institute think tank in Toronto

One website claims the Black Bloc tactic is used as a "security and safety measure."

The idea of wearing the all-black uniform is that everyone in the "bloc" looks alike, so when a brick is tossed through a store window or a car is set alight, the group disperses, making it next to impossible for police to identify the perpetrator of the crime.

It also prevents them from being singled out in media photographs or television coverage.

The tactic has been around since the 1980s. And images of the aggressive protesters were captured during the 1999 World Trade Organization ministerial meeting in Seattle.

Since then, the Black Bloc has been present at almost every world event, smashing, breaking and destroying stores, vehicles and anything else they come upon.

In Seattle, it was McDonald's and Nike. In Vancouver, Black Bloc members smashed windows at Olympic sponsor HBC's downtown store displaying Games merchandise and spray-painted the anarchist circle-A symbol on at least one bus and city vehicle.

Thompson said the Black Bloc typically consists of people who describe themselves as anarchists.

"They deliberately promote violent confrontation to draw the naive and curious into their mob mentality," said Toronto police Chief Bill Blair, during a news conference on Saturday.

"We saw this tactic, often called a Black Bloc tactic demonstrated in all its mindless violence and destruction," said Blair.

Thompson said even though people who use these strategies are typically disorganized, there seems to be organization in Toronto's protest.

Many of these violent demonstrators have been using cell phones to tell others where police are located, said Thompson.

But he also said other tactics are "straight out of primitive warfare."

"They don't like being flanked or surrounded. That actually panics them," said Thompson. "They're looking for risk-free violence."

Black Bloc proponents notoriously avoid speaking to reporters, but in a rare interview in February, The Canadian Press spoke with a man who engaged in these tactics.

"I'm a father and a husband," the soft-spoken man said during the interview. He didn't want his name to be used.

At the time, he said the actions were intended to show people just how intensely they felt about the Olympics' adverse impact on the poor.

With no structure and no purported leaders, it is difficult for authorities to track the group.

Police in Toronto have been investigating Black Block activities for months.

During a special bail hearing at on an Ontario court for people charged with G20-related offences, Crown prosecutor Vincent Paris described a large-scale police investigation into the activities of Black Bloc that began in April 2009.

He also said information is coming in "fast and furious" as riots occur in downtown Toronto.

"It's happening as we speak," Paris said of the alleged activities planned by the groups.

Thompson said since the inception of the summit, security officials have also been aware of the Black Block activities.

"We knew they would come, that was a given and that's what most of the billion-dollar security was spent on, the anticipation that these people would be there," he said. 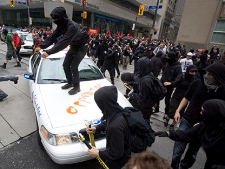