Despite advance poll numbers that offered some optimism, voter turnout during Thursday's provincial election plummeted to an all-time low with less than half of all eligible voters choosing to cast a ballot.

Elections Ontario officials now say 49.2 per cent of eligible voters cast a ballot, down from the previous record low of 52.1 per cent in 2007.

After polls closed Thursday night, the early estimate was pegged turnout 47.6 per cent.

There are several theories or possible reasons voter turnout was so low, including a lack of interest in the campaign, a Toronto Maple Leafs game being held the same night as the vote, and voter fatigue.

Fatigue was cited because the provincial election was the third time Ontarians have gone to the polls this year after voting in a municipal campaign in October 2011 and a federal campaign last May.

Online voting on the horizon?

The poor showing is adding momentum to the push for online voting. Some municipalities, including Markham, have tested online voting in past civic elections, but it has never been used at the provincial or federal level.

Elections Canada officials have already expressed their desire to allow people to cast their votes via the Internet in a byelection after 2013, in addition to traditional voting methods.

There was some optimism heading into Thursday's provincial election because of a decent showing at advance polls in September.

According to preliminary figures, almost 625,000 people cast their votes in advance, an increase of about 175,000 compared with 2007 advance polls.

However, the increase may be attributed to advance poll days being extended this year.

The record low turnout helped to elect a Liberal minority government led by Dalton McGuinty, who became the first Liberal leader to win three consecutive elections in more than 100 years. 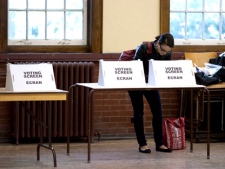 A woman casts her ballot at a voting station in Toronto during the Ontario provincial election Thursday, Oct. 6, 2011. THE CANADIAN PRESS/Chris Young.