CP24.com readers were asked to share their Remembrance Day stories with us, whether they participated in the war or grew up with a loved one in service. These are their memories and the photos that have defined their experience.

We are often reminded of the major events of wars in which Canada participated - Vimy, D-Day, Holland etc - but there is one story that is very important to me - the sinking of HMCS Athabaskan, in the early AM hours of April 29th, 1944, taking the lives of 128 men from a ships complement of 256.

The Athabaskan sinking is memorable as the only Canadian ship to be lost in action with surface ships. She had served by escorting convoys on the Murmansk run into Russia, sub chasing north of Scotland and the English Channel, as well as joining the HMS Duke of York in the sinking of the German battleship Scharnhorst, the twin of the Bismark.

On a mission to clear the English Channel in preparation for the Normandy landings, the Athabaskan along with her sister ship HMCS Haida (now at berth in Hamilton) engaged enemy destroyers damaging two but not before the Athabaskan was torpedoed in her stern, destroying the stern X and Y guns.

The explosion was fatal and the Athabaskan sank off the Brittany coast in 200m. As day broke, the residents along the Brittany coast came out to pull the floating bodies from the beaches, with many buried in a chain of small French cemeteries along that coast line.

Attached are the photos of the A Gun crew including my father which was the forward turrets of the Athabaskan. I also attach a photo of the X gun crew, all of whom were lost as the ship was hit.

Of the 128 survivors, many were taken as POWs by the Germans, including my father, with the remainder rescued by the Haida, before she had to turn back to England as the sun rose. My Dad was released from Marlag Milag POW camp in May, 1945.

In the water, the Athabaskan survivors clung to floats - my father tried on three occasions to hold his mate Frank "Sammy" Sampson - but alas in the frigid waters - causing hypothermia and drowsiness, my father let go, and Sammy slipped away and was lost. Years later, during a History Channel program on the Athabaskan, my father tearfully recounted this painful story - always blaming himself for not holding tighter. Remarkably, relatives of Sammy were watching the TV program, and for the first time, heard the story of their relative. 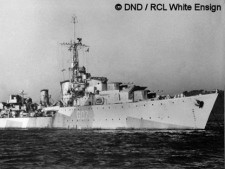 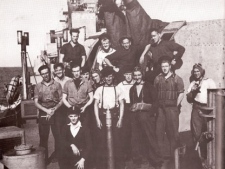 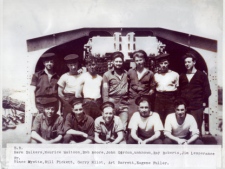 The A Gun Crew