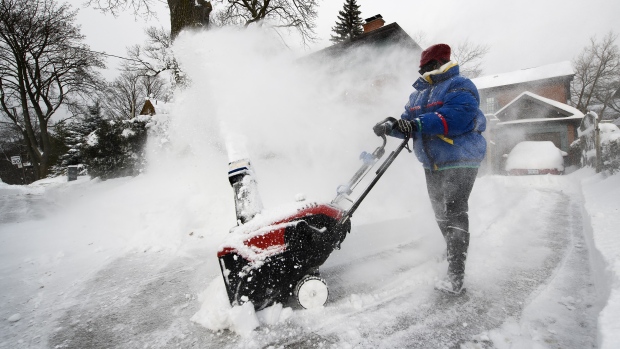 A woman uses a snowblower to dig out from the snow after Toronto and most of southern Ontario got hit by a storm in Toronto on Tuesday, January 29, 2019. THE CANADIAN PRESS/Nathan Denette

More snow could be on the way this afternoon in the GTA just in time for the afternoon commute.

Flurries tapered off this morning and were followed by gusty winds and Environment Canada now says more flurries are possible later this afternoon.

The city will see a high of -4 C but the temperature will feel closer to -14 with the wind chill.

Flurries are expected to end late this evening.

Police and city staff warned of slippery road conditions earlier today following a blast of snowfall in the GTA this morning.

OPP Sgt. Kerry Schmidt told CP24 that there were about a dozen collisions on the go on GTA highways at around 7:30 a.m. this morning.

He noted that officers responded to about 250 collisions in a 24-hour period.

“The roads are plowed but they are still wet,” he said.

In York Region, the situation was similiar:

COLLISION COUNTER - Since 3am we have responded to 8 collisions across the region. We expect that number to rise significantly as the morning commute gets going. Please drive according to the conditions, which are horrible. Slow down and leave extra space.

City of Toronto spokesperson Eric Holmes said it will likely take days for crews to clean up the roadways.

The first round of sidewalk salting and plowing commenced at approx. 9pm Wednesday and will be completed by approx 9am. Multiple rounds of sidewalk operations will be required. Cleanup will continue through the weekend.

“Our equipment it is out, it has been out all night. It continues to work throughout the day,” he said Thursday.

He urged drivers to give plows and salt trucks the space they need to clear the streets.

“They will continue to work for the next few days to get the roads in a good state,” Holmes said.

Multiple GTA school boards have cancelled buses for the day due to road conditions and Metrolinx spokesperson Anne Marie Aikins confirmed that GO Transit buses were averaging about 20 to 30-minute delays this morning.

Due to the wintry weather & a messy drive, GO buses are averaging 20-30 minute delays. Slow is safer under these conditions. Stay safe out there.