TORONTO - A blast of winter forced schools to close, buses to be cancelled and police to plead with southwestern Ontario motorists to slow down on Monday.

Provincial police Sgt. David Rektor said there were 170 collisions in the 12 hours after the snow started falling in the region on Sunday, and the toll continued to mount through the day.

"Motorists, in particular those with SUVs and transports, are continuing to drive at posted speed limits when it fact they should be cutting their speed in half," Rektor said.

"These are all preventable incidents."

Schools in Goderich and the Thames Valley District, as well as those covered by the London District Catholic School Board, were closed because of snow.

All public transit buses in London, Ont., were pulled off the roads Monday night. Full service was expected to resume on Tuesday morning.

"We're bringing in more and more (snow removal) equipment," said London Mayor Joe Fontana. "Every time we try, we get walloped again with a new streamer."

Canada Post cancelled mail delivery in London on Monday, but service continued as scheduled in St. Thomas, Aylmer and Strathroy.

Environment Canada said unofficial estimates Monday afternoon indicated some areas of London received up to 70 centimetres of snow with another 20 to 30 cm expected by Tuesday afternoon.

Forecasters said London's single day snowfall record of 57 cm set on Dec. 7, 1977, could be in jeopardy. 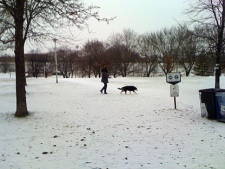