After Mueller, Trump says he'll fight Democrats on all fronts 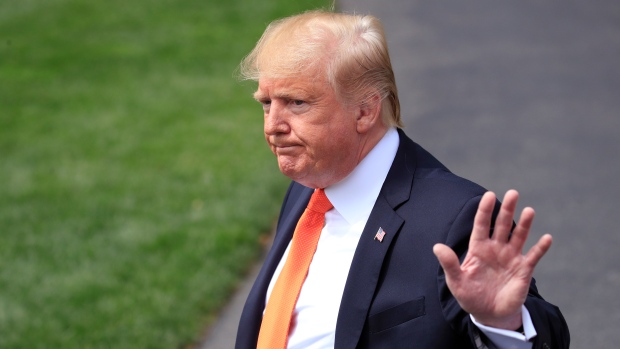 President Donald Trump waves after talking to reporters as he leaves the White House in Washington, Wednesday, April 24, 2019, for a trip to Atlanta with first lady Melania Trump to participate an opioids summit. (AP Photo/Manuel Balce Ceneta)

As House Democrats ramp up their post-Mueller investigations into President Donald Trump, his strategy for responding is simple: Resist on every legal front. The administration is straining to hold off congressional investigators, including their efforts to obtain the president's tax returns, his business' financial records and testimony from former senior aides.

"We're fighting all the subpoenas," Trump declared on Wednesday. And if House members go all the way and try to impeach him, he said he would "head to the Supreme Court" for help.

Portraying himself as unjustly persecuted in the aftermath of special counsel Robert Mueller's probe, Trump said his White House would refuse to co-operate with further congressional investigation.

"I thought after two years we'd be finished with it. No, now the House goes and starts subpoenaing," Trump told reporters on the White House lawn, asserting the probes have been commissioned solely for political advantage.

"The only way they can luck out is by constantly going after me on nonsense," Trump said. "But they should be really focused on legislation."

Washington has spent a week sifting through the aftermath of Mueller's report, which did not find a criminal conspiracy between the Trump campaign and Russia to help him win the 2016 election but reached no conclusion on whether he obstructed justice. Attorney General William Barr later said the president was not guilty of obstruction.

Trump has railed against Mueller's report, even resorting to public profanity in dismissing it, but has also embraced it, claiming exoneration and painting any other attempt as partisan overreach.

But the Democrats, while debating whether to proceed down a path toward impeachment, have ratcheted up their own probes. The White House, in turn, has moved to stop them, laying the groundwork for what could be months of legal and political battles.

"We're going to evaluate each request as they come, but we are not going to allow for congressional harassment," said Trump attorney Jay Sekulow. "And in that context, when appropriate, we will respond appropriately -- which will include litigation when necessary."

Over just the past few days, the White House has thrown up a series of stop signs.

--The Trump Organization filed a lawsuit against the chairman of the House Oversight Committee to stop his efforts to obtain the company's financial records.

--Treasury Secretary Steven Mnuchin ignored Tuesday's House deadline to turn over the president's tax returns, instead asserting that he will decide next month.

--The White House failed to provide its former personnel security director, Carl Kline, to testify before Congress over how some West Wing aides, including Jared Kushner and Ivanka Trump, obtained security clearances, leading the House to hold Kline in contempt.

--The White House asserted it will fight any congressional subpoena, including one for former White House Counsel Don McGahn, an important figure in the Mueller investigation, to appear and provide documents.

"We're going to fight everything; we already gave them every document and witness we have," said Rudy Giuliani, another of the president's attorneys. "Why do we have to do it again?"

Michael Caputo, who served as a communications adviser to Trump's 2016 campaign, met with the president, first lady, and several White House staffers Wednesday in the Oval Office. Caputo said it was clear the president had no intention of co-operating with Democrats and had rejected the advice of people who say he should be quiet and move on.

The administration has considered asserting executive privilege over witnesses, even some who previously co-operated with Mueller.

While the White House has no legal ability to block the subpoena issued to McGahn, the administration could try to assert executive privilege over particular testimony it believes would hamper private presidential conversations, according to Washington defence lawyer Andrew Herman, who represents clients in congressional investigations.

Democrats have argued that the law is on their side on a variety of fronts, including an Internal Revenue Code section that gives the House Ways and Means Committee chairman authority to obtain tax returns. But Herman contended that for the White House, "I think reality is on their side. The lack of law enforcement options that the House is going to have is on their side."

The House could sue. Or it could make a referral to prosecutors over a contempt finding, but such Justice Department prosecutions are rare.

The White House is correct in arguing that subpoenas it receives must have a legitimate legislative purpose, but that is often a low hurdle for a congressional committee to surmount.

A fierce internal debate has erupted over whether to pursue impeachment, a course that Speaker Nancy Pelosi has counselled against. But her party's lawmakers have already signalled they will vote to hold reluctant witnesses in contempt of Congress and are preparing to eventually go to court to force testimony and co-operation. Democrats also argue that by refusing to co-operate with Congress, Trump is obstructing additional investigations.

If the White House forces McGahn to defy the subpoena to appear before the House Judiciary Committee, Chairman Jerrold Nadler says it will "represent one more act of obstruction by an administration desperate to prevent the public from talking about the president's behaviour."

Trump's strategy for fighting impeachment at the Supreme Court could run into a roadblock: The high court itself said in 1993 that the framers of the U.S. Constitution didn't intend for the courts to have the power to review impeachment proceedings. The Supreme Court ruled that impeachment and removal from office is Congress' duty alone.

The Mueller investigation has become both a playbook and a cover story for White House officials.

Soon after the special counsel's appointment, the White House, led by former attorneys Ty Cobb and John Dowd, opted to co-operate, believing that turning over witnesses and documents would bring about a speedy resolution. But the Trump legal team abruptly shifted course last year, instead choosing to stop working with Mueller while unleashing a scathing public relations attack on the probe, a strategy Trump and his allies are recycling against the Democratic investigations.