Aid group appeals for Italy to let 135 migrants off boat 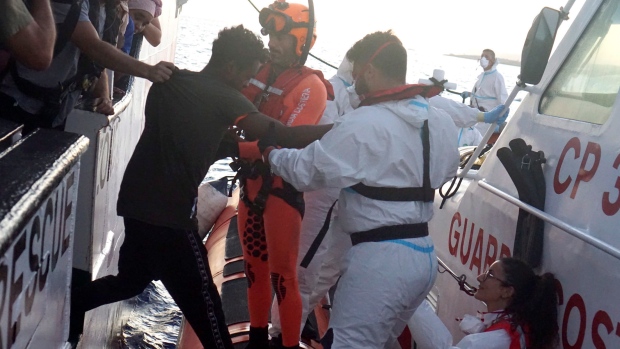 Migrants are evacuated by Italian Coast guards from the Open Arms Spanish humanitarian boat off the coast of the Sicilian island of Lampedusa, southern Italy, Thursday, Aug. 15, 2019. A Spanish aid boat with 147 rescued migrants aboard is anchored off a southern Italian island as Italy's ministers spar over their fate. (AP Photo/Francisco Gentico)

ROME -- Three migrants and one of their family members have been evacuated from a Spanish humanitarian rescue boat anchored near a tiny southern Italian island.

Following the evacuations Friday for medical reasons, Open Arms appealed to authorities in the name of "humanity" to disembark the remaining 135 migrants, rescued in the Mediterranean near Libya two weeks ago.

Italian Premier Giuseppe Conte earlier in the week asked Salvini to allow all 32 minors off, but the minister isn't budging.

Salvini and his right-wing League party are seeking to end Conte's populist coalition with a no-confidence vote soon.

Another private rescue boat, Ocean Viking, with 356 migrants aboard, was reported sailing in the waters between Italy and Malta.