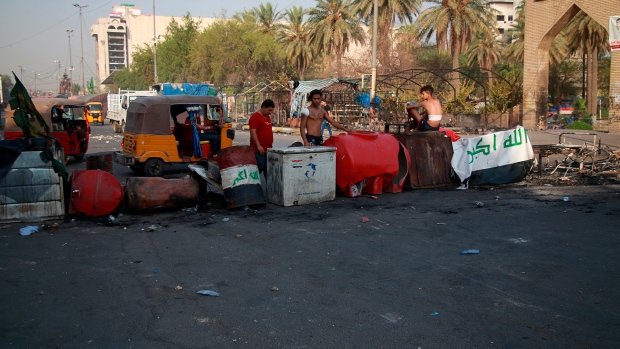 BAGHDAD -- Two anti-government protesters were killed and 21 were injured in Baghdad in new clashes between demonstrators and Iraqi security forces, human rights monitors and officials said Monday. The violence comes after months of quiet in the wake of the coronavirus pandemic.

Tension between the security forces and the demonstrators soared when dozens of protesters cut off the road connecting two main intersections - the Tayaran Square and the Tahrir Square. Some burned tires while others chanted slogans about power cuts in the scorching summer months.

Iraqi security forces eventually fired tear gas to disperse the crowds, said Iraqi health and security officials, speaking on condition of anonymity because they were not authorized to talk to reporters.

In October, mass anti-government protests erupted in Baghdad and across Iraq's predominately Shiite south as tens of thousands of angry Iraqi youth took to the streets to decry rampant government corruption, poor services, including electricity, and unemployment. Pressure from protests lead to the resignation of Prime Minister Adel Abdul-Mahdi.

His successor, Mustafa al-Kadhimi has vowed to meet protester demands by holding early elections and investigating protester deaths. Since October, over 600 demonstrators have been killed during protests due to live fire and tear gas used by security forces. But al-Kadhimi also has to cope with an unprecedented economic crisis spurred by falling oil prices and a surge in virus cases.

Iraq is facing electricity shortages amid searing summer months, when temperatures can top 50 degrees Celsius, or about 122 degrees Fahrenheit.

A senior Electricity Ministry official said the power supply fell short by 10,000 megawatts this summer, down 1,000 megawatts, compared to last year, due to lack of maintenance in several power plants because of lack of of funds in state coffers. This has also slowed investment projects to add more power to Iraq's grid, he said, speaking on condition of anonymity in line with regulations.

The spread of the coronavirus had halted mass rallies and prompted most protesters to leave, with only a few remaining at the tent sit-in at Tahrir Square, once the epicenter of the protest movement.

Ali al-Bayati, a spokesman for the semi-official Independent High Commission for Human Rights, also said two protesters had been killed. The commission said their reports indicate live fire and pellet rifles were used to disperse protesters.

A statement from the military spokesman Yahya Rasool said security forces had been given strict instructions not to use violence against peaceful protesters “except in the event of extreme necessity.”

He said the events in Baghdad squares were “unfortunate” and that a probe was underway into what happened.

“We are aware of the difficulties that our people are going through,” Rasool said. “This government, with its short life, is trying to address (them) under exceptional economic and health conditions,” he said.