Bangladesh garment makers say $3B in orders lost to virus 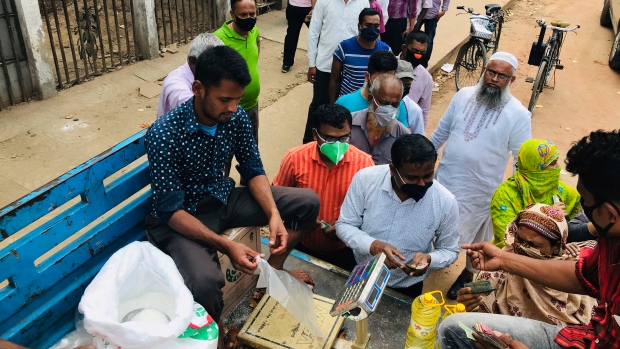 People line up to shop for essential items from a roadside truck Wednesday, March 25, 2020 in Dhaka, Bangladesh. The new coronavirus causes mild or moderate symptoms for most people, but for some, especially older adults and people with existing health problems, it can cause more severe illness or death. (AP Photo/Al-emrun Garjon)

DHAKA, Bangladesh - Bangladesh garment manufacturers say fashion retailers have cancelled or put on hold more than $3 billion in orders due to the coronavirus outbreak, though a handful have agreed to pay anyway.

The data from the Bangladesh Garment Manufacturers and Exporters Association released Monday reflected both orders already made or in the works and planned orders from the country, which is the world's second largest exporter of clothing after China.

The cancelled orders, according to reports to the BGMEA from manufacturers, included tens of millions in purchases from many big buyers, including European buyers C&A and Inditex, Primark of Ireland and Britain's Marks & Spencer.

Bangladesh manufacturers and labour groups have been appealing to big retailers to honour their commitments to suppliers.

Bangladesh is just beginning to feel the direct impact of the pandemic and its government has ordered a shut down of most businesses to help contain it. But shocks to the country's export markets have been cascading into its economy for weeks.

A survey of factory owners in Bangladesh released Friday showed millions of Bangladesh factory workers being sent home without the wages or severance pay they are owed.

The BGMEA reported that $1.8 billion in orders have been put on hold and another $1.4 billion have been cancelled. Cancellations of planned orders, for April-December, amounted to nearly $1.7 billion, it said. The figures are conservative because they exclude orders that would go to multiple buyers.

The new data were incorporated into a report by Pennsylvania State University's Center for Global Workers' Rights and the Worker Rights Consortium, a Washington, D.C.-based labour rights organization.

Sweden's H&M has said it was pausing new orders and reevaluating plans but will pay suppliers and take delivery of orders already under production or already made, according to terms already agreed on.

“This is in accordance with our responsible purchasing practices, and not only the case in Bangladesh, but in all production countries,” the company said in a statement.

PVH, which owns the Calvin Klein, Tommy Hilfiger and Heritage brands, has told suppliers it is releasing invoices that had been put on hold since March 18. Later invoices will gradually be processed.

The commitment for orders already under production or finished products not yet shipped would enable factory owners to get financing to tide them over, said a letter to suppliers seen by The Associated Press.

“PVH and H&M are doing the right thing, in contrast to the long list of brands refusing to pay for goods workers have already made for them,” said Scott Nova, executive director of the Worker Rights Consortium.

U.K. retailer Tesco, one of the retailers mentioned in the latest data, said in a statement that it was buying from most of its suppliers and working with them to understand how the outbreak is affecting them.

Marks & Spencer said it was trying to defer orders and carry forward its inventory. “In these unprecedented times, as a responsible retailer we will continue to do all we can to support our partners and suppliers,” it said in an emailed statement.

Big Western brands have come under heavy pressure to improve conditions in factories after huge fires and other disasters killed hundreds of workers.

The store closures and other disruptions from the virus outbreak are straining a fragile supply chain in which big buyers have been squeezing their suppliers for years.

More than 1 million of the more than 4 million garment workers in Bangladesh already have lost their jobs or have been furloughed because of order cancellations and the failure of buyers to pay for cancelled shipments.