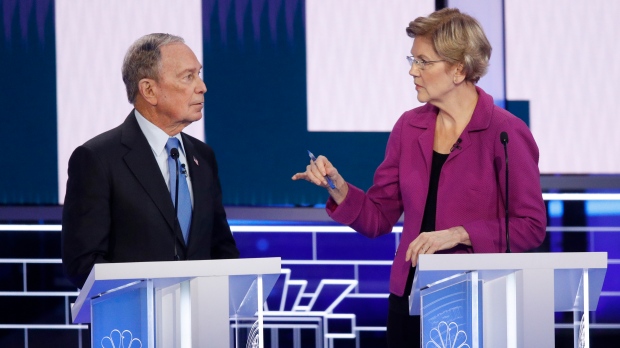 LAS VEGAS - From the opening bell, Mike Bloomberg faced fierce attacks from his Democratic rivals over race and gender at Wednesday night's high-stakes debate in Las Vegas as the former New York City mayor faced off on the debate stage for the first time.

The 78-year-old former Republican was making his debate debut as one of the Democrats' strongest six White House hopefuls -- as determined by national polls -- while the party's moderate wing struggles to unify behind an alternative to polarizing progressive Bernie Sanders.

Sanders lashed out at Bloomberg's policing policies as New York City mayor that he said targeted “African-American and Latinos in an outrageous way.”

It was a raucous affair just three days before Nevada voters decide the third contest of the Democratic Party's turbulent 2020 primary season. Bloomberg won't be on the ballot Saturday, yet he was expecting to face intense scrutiny on national television for the first time, having faced relatively little in his surprisingly swift rise from nonpartisan megadonor to top-tier contender.

With just six candidates in the debate, the smallest group to date in a field that initially featured 20 on stage, the stakes were high for everyone.

Longtime establishment favourite Joe Biden, the former Obama vice-president, is fighting to breathe new life into his flailing campaign, which enters the night at the bottom of a moderate muddle behind former South Bend, Indiana, Mayor Pete Buttigieg and Minnesota Sen. Amy Klobuchar. Sanders, a Vermont senator, has emerged as the progressive wing's preference after two contests as Massachusetts Sen. Warren struggles to regain energy for her campaign.