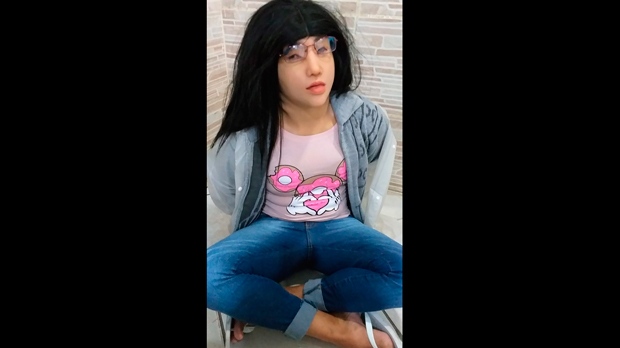 This photo released by the Rio de Janeiro Penitentiary Administration Secretariat, shows a man who authorities identify as jailed Brazilian drug trafficker Clauvino da Silva, alias “Baixinho,” which means "Shorty," wearing a mask, wig, glasses and feminine clothing, as his hands are confined behind his back at a prison complex in Rio de Janeiro, Brazil, Sunday, Aug. 4, 2019. Authorities say the prisoner tried but failed to escape from the prison wearing the disguise. (Rio de Janeiro Penitentiary Administration Secretariat via AP)

RIO DE JANEIRO -- A Brazilian gang leader who tried to escape prison dressed as his daughter has been found dead in his cell.

Rio de Janeiro prisons authorities said Tuesday that Clauvino da Silva apparently hanged himself with a sheet. An investigation has been opened.

Da Silva was caught over the weekend as he tried to head out of a jail in western Rio wearing a female silicon mask, a long dark-haired wig, tight jeans with a pink t-shirt.

Da Silva was part of the leadership of one of the most powerful criminal groups in Brazil. He was trying to pass as his 19-year-old daughter, who was visiting him that day.

Officials say he managed to reach the prison's exit doors, but his nervousness caught the attention of security guards.