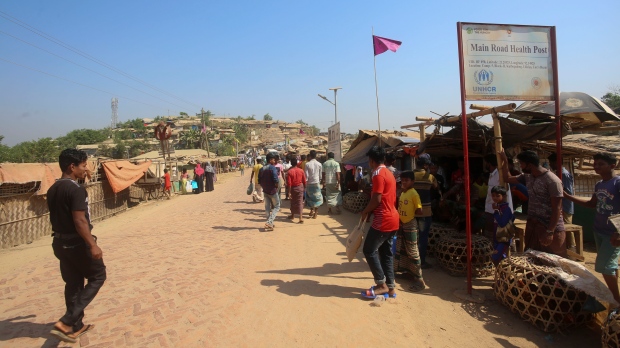 In this Wednesday, April 1, 2020, photo, Rohingya refugees walk at the Kutupalong refugee camp, Cox’s Bazar, Bangladesh. Aid workers are bracing for a possible outbreak of the coronavirus in one of the world's largest refugee camps in Bangladesh, but officials are already warning that containing the disease among more than 1 million tightly packed Rohingya Muslims will be a daunting task. (AP Photo/Suzauddin Rubel)

DHAKA, Bangladesh - Aid workers are bracing for a possible outbreak of the coronavirus in one of the world's largest refugee camps in Bangladesh, with officials warning that containing the disease among more than 1 million tightly packed Rohingya Muslims will be a daunting task.

With about 40,000 people per square kilometre (103,600 per square mile) living in plastic shacks side by side, which is more than 40 times the average density of Bangladesh, the refugees are dangerously exposed to the virus.

Each shack is barely 10 square meters (107 square feet) and many are overcrowded with up to 12 people.

There have been no reported cases of infection in the camps yet, but officials remain concerned. The U.N. is not doing any testing for the virus but sends any suspected cases to a government hospital.

“We are doing our best to protect them, but if the virus breaks out it will be a tough job for all of us,” Mohammad Shamsuddoza, the additional refugee, relief and repatriation commissioner of Bangladesh, told The Associated Press by phone from Cox's Bazar on the border with Myanmar, from where the Rohingya have fled a government crackdown.

He said the 34 camps are a major challenge despite preparations to provide better health care services.

“It's overcrowded, every family has multiple members,” he said. “So this is practically very difficult to keep them separated.”

Bangladesh has reported six deaths and 54 cases of COVID-19 amid concerns that the virus could spread in the South Asian country through Bangladeshis who have returned from Italy and other places struggling with the disease.

Many of those returning did not respect social distancing or stay in self-quarantine.

One reason for the low number of reported cases could be insufficient testing as health care facilities initially lacked testing kits. Bangladesh, a nation of 160 million, is currently under a lockdown until April 11 to help contain the virus, and troops are out to enforce the stay-at-home rules.

Mohammad Kamal Hossain, the top government administrator in Cox's Bazar, said foreigners have been banned from frequent visits to the camps unless they are “absolutely necessary.”

“They have been instructed to carry on work in a limited scope,” he said.

A 100-bed isolation ward was built inside the camps and another 200-bed hospital with modern facilities is being deployed in co-operation with the World Health Organization, he said.

The U.N. refugee agency said about 1,200 additional beds were being readied just outside the camps at Ukhiya and Teknaf.

Louise Donovan, UNHCR communications officer in Cox's Bazar, said planning was also underway for 1,700 more beds in co-operation with the International Organization for Migration, UNICEF and Save the Children International.

Donovan said water and soaps are being widely distributed, and thousands of community health workers including the refugees themselves were being trained.

Others working in the camps are told to spread awareness about the virus. Mosque imams and local leaders have also been engaged.

“Communications are ongoing through radio spots, video, posters, leaflets and messages in Rohingya, Burmese and Bengali languages, explaining how the virus spreads, how people can protect themselves and their families, symptoms and care-seeking,” Donovan said.

Fear gripped the camps after a 75-year-old Bangladeshi woman in nearby Cox's Bazar town tested positive for the coronavirus. A Rohingya family of four who returned from India recently also was quarantined for 14 days in a U.N. transit camp.

The message is reaching the refugees.

“The organizations working here told us about cough, cold and soar throat being the symptoms of the coronavirus,” Golforaj Begum, a 54-year-old refugee, told the AP at Kutupalong camp.

“They also told us how to maintain our safety. Such as not to go to other rooms, maintaining a 5-foot distance from one another, not to mix in a crowd, washing hands properly before cooking and eating. They also told us to keep our backyards clean,” she said.

The Rohingya have fled Myanmar since August 2017, when Myanmar's military launched counterinsurgency operations in response to rebel attacks. Security forces have been accused of mass rapes, killings and burning thousands of homes.

Myanmar's government has long considered the Rohingya to be migrants from Bangladesh, even though their families have lived in the Buddhist-majority country for generations. Nearly all have been denied citizenship since 1982, effectively rendering them stateless. They are also denied freedom of movement and other basic rights including education.