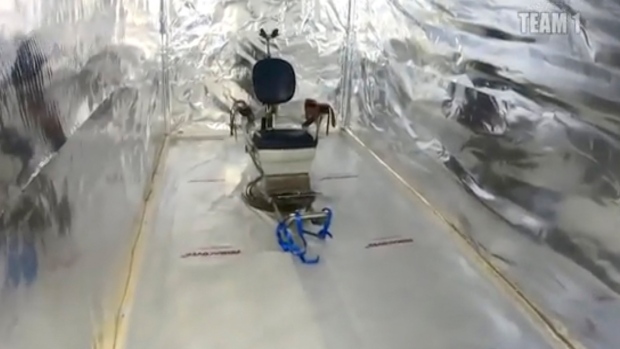 In this grab taken from video made available by the Netherlands Police on Tuesday, July 7, 2020, a view of a sea container equipped as a torture chamber, in Wouwse Plantage, Netherlands. Dutch police say they have arrested six men after discovering sea containers that had been converted into a makeshift prison and sound-proofed “torture chamber” complete with a dentist’s chair, tools including pliers and scalpels and handcuffs. (Netherlands Police via AP)

THE HAGUE, Netherlands - Dutch police arrested six men after discovering sea containers that had been converted into a makeshift prison and sound-proofed “torture chamber” complete with a dentist's chair, tools including pliers and scalpels and handcuffs, a high ranking officer announced Tuesday.

Authorities said police conducted the raid before the torture chamber could be used and alerted potential victims, who went into hiding.

The grisly discovery was made last month by officers investigating leads generated by data from encrypted phones used by criminals. The communications network was cracked recently by French police. Detectives in Britain and the Netherlands have already arrested hundreds of suspects based on the encrypted messages.

Tuesday's announcement gave a chilling insight into the increasingly violent Dutch criminal underworld, which is involved in the large scale production and trafficking of drugs.

Dutch police said last week that their investigations, code-named 26Lemont, based on millions of messages from the EncroChat phones, had led to the arrest of more than 100 suspects and seizure of more than 8,000 kilograms (17,600 pounds) of cocaine and 1,200 kilograms (2,600 pounds) of crystal meth as well as the dismantling of 19 synthetic drugs labs and seizure of dozens of firearms.

On June 22, Dutch national police force officers arrested six men on suspicion of crimes including preparing kidnappings and serious assault. Detectives also discovered the seven converted sea containers in a warehouse in Wouwse Plantage, a small village in the southwestern Netherlands, close to the border with Belgium, according to a statement released Tuesday.

They were tipped off by messages from an EncroChat phone including photos of the container and dentist's chair with belts attached to the arm and foot supports. The messages called the warehouse the “treatment room” and the “ebi,” a reference to a top security Dutch prison. The messages also reaveled identities of potential victims, who were warned and went into hiding, police said.

Video released by the police showed a heavily armed arrest team blasting open a door at the warehouse and discovering the improvised prison. Another armed team detained a suspect in Rotterdam.

“Six of the containers were intended as cells in which people could be tied up and one container was intended as a torture chamber,” Andy Kraag, head of the police's National Investigation Service, said in a video released by police, adding that the police operation “prevented a number of violent crimes.”

A search of the containers uncovered bags containing tools including hedge cutters, scalpels and pliers. The tools “were likely intended to torture victims or at least put them under pressure,” the police statement said.

In searches of other properties, including what police described as a base for the criminals near the port city of Rotterdam, officers found police uniforms and body armour, stolen vehicles, 25 firearms and drugs.

A court in Amsterdam ordered the six suspects held for 90 days as investigations continue.

“This is a great result of the 26Lemont investigation,” Kraag said. “And, take it from me, many more results will follow.”