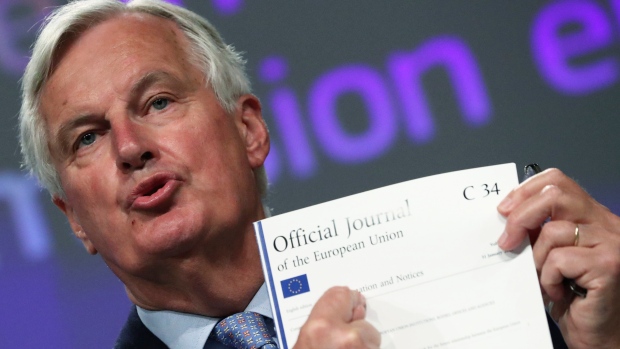 BRUSSELS - Another round of trade discussions between the European Union and the U.K. ended Friday - and once again there were no signs of real progress ahead of a looming deadline on whether a transition arrangement can be extended.

Following four days of video discussions because of the coronavirus pandemic, the two sides remained at loggerheads on a number of issues, including on regulations for businesses. Their positions on fisheries also remain distant, with the U.K. adamantly opposed to EU demands for long-term access to British waters.

“The truth is there was no significant progress this week,” the EU chief negotiator Michel Barnier said during a press conference.

The U.K. left the political institutions of the EU on Jan. 31 but remains inside the EU's tariff-free economic zone until the end of the year. That so-called transition period can be extended by two years but a request to do so has to be made by July 1. Prime Minister Boris Johnson has repeatedly said he won't ask for an extension.

The best hope for an imminent breakthrough in talks now rests on a high-level political meeting between Johnson and the EU's top official, Ursula Von der Leyen, scheduled for later this month.

The hope is that they will be able to meet in person and push the negotiations forward in a way that remote conferencing has not so far.

If they don't reach an agreement by the end of the year, tariffs and quotas will return on trade between the two sides, another economic shock - on top of the pandemic - that most economists think would affect Britain more. Cars exported from one side to the other, for example, would face a 10% levy.

Barnier lambasted the U.K. for trying to distance itself from commitments made in the political declaration that accompanied the Brexit agreement. Those dealt with issues related to its departure from the bloc such as citizens' rights and the value of historic liabilities.

In the political declaration, which is not a legal document in the way the Brexit withdrawal deal is, the two sides laid out their ambitions for the trade talks and their hopes about the future relationship.

Insisting a trade deal remains possible, Barnier said an agreement on fisheries is required for a compromise. “They continue to condition access to waters to an annual negotiation which is not possible for us, not even technically possible.”

The British government's chief negotiator, David Frost, said progress “remains limited” but that the talks have “been positive in tone.”

He said the government remains committed to a “successful outcome” and suggested that the format of the remote discussion may be hindering progress.

“We are close to reaching the limits of what we can achieve through the format of remote formal rounds,” he said. “If we are to make progress, it is clear that we must intensify and accelerate our work.”

Frost added the British government wants to conclude the discussions “in good time” so people and businesses get “certainty about the trading terms that will follow the end of the transition period.”