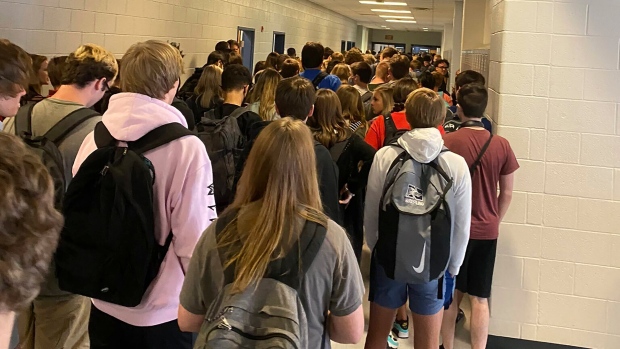 In this photo posted on Twitter, students crowd a hallway, Tuesday, Aug. 4, 2020, at North Paulding High School in Dallas, Ga. The Georgia high school student says she has been suspended for five days because of photos of crowded conditions that she provided to The Associated Press and other news organizations. Hannah Watters, a 15-year-old sophomore at North Paulding High School, says she and her family view the suspension as overly harsh and are appealing it. (Twitter via AP, File)

DALLAS, Ga. - A Georgia high school plans to start the week with all classes shifting online after nine students and staff tested positive for the coronavirus when the school year opened last week with most students attending in-person.

North Paulding High School made headlines soon after students returned to school Aug. 3 when photos posted on social media showed hallways crowded with students, and many of them not wearing masks. The school's principal notified parents Saturday that six students and three staff members had tested positive for the virus, though it's unknown if any were infected at school.

Now students will take online classes Monday and Tuesday, Paulding County Schools Superintendent Brian Ott said in a letter to parents Sunday. He said those two days will be used to clean and disinfect the school, and parents will learn Tuesday evening if in-person classes can resume later in the week.

“Hopefully we can all agree that the health and safety of our students and staff takes precedence over any other considerations at this time,” Ott said in his letter, which was obtained by Atlanta-area news outlets.

In announcing the nine infections among students and staff, North Paudling High School principal Gabe Carmona wrote that each of them had been in the school building sometime in the prior week. But it was unclear whether the school would quarantine other students and staff who may have been exposed. The Atlanta Journal-Constitution reported it obtained the principal's letter from the school district.

Meanwhile, school officials in a nearby metro Atlanta county reported 12 students and two staff members across a dozen schools tested positive for the virus during their first week back at school. The Cherokee County school system reported that more than 250 students with potential exposure had been sent home to quarantine for two weeks.

“We have students and staff reporting presumptive, pending and positive COVID-19 tests every day, and this will continue as we operate schools during a pandemic,” Cherokee County Schools Superintendent Brian Hightower wrote in a letter to parents Friday.

Cherokee County also drew attention because of online photos. Dozens of students at two of its high schools squeezed together for first-day-of-school senior photos. None wore masks.

Hightower said in his letter that many of the seniors in those online photos “wear masks routinely” - though the schools don't require them to. He also said the school system was taking “extra steps for transparency.” In addition to the superintendent's letter, the school system posted information about all confirmed infections and quarantines on its website.