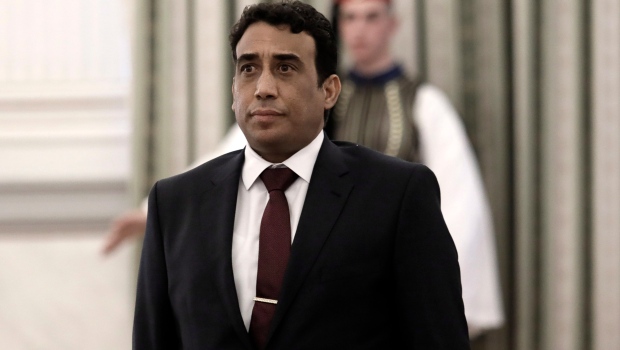 In this Tuesday, Dec. 18, 2018 file photo Mohamed Younis A.B. Menfi Ambassador of Libya in Greece attends a ceremony at the Presidential Palace in Athens. Greece's foreign minister says on Friday, Dec. 6, 2019, his country is expelling the Libyan ambassador in the latest escalation of a dispute over a controversial deal between Libya's UN-supported government and Turkey on maritime boundaries in the Mediterranean. (John Liakos/InTime News via AP, File)

ATHENS, Greece -- Greece ordered the expulsion of the Libyan ambassador Friday in the latest escalation of a dispute over a controversial deal signed between Libya's U.N.-supported government and Turkey on maritime boundaries in the Mediterranean.

Foreign Minister Nikos Dendias said the ambassador had been summoned to the ministry in the morning to be informed of the decision and was given 72 hours to leave the country. Turkey's foreign minister condemned the move as “outrageous,” while the Libyan foreign minister described it as “unacceptable.”

The deal reached between Libya and Turkey would give Turkey access to an economic zone across the Mediterranean, over the objections of Greece, Cyprus and Egypt, which lie between Turkey and Libya geographically.

All three have blasted the accord as being contrary to international law. The deal has added tension to Turkey's ongoing dispute with Greece, Cyprus and Egypt over oil and gas drilling rights in the eastern Mediterranean.

Although NATO allies, neighbours Greece and Turkey are divided by a series of decades-old issues, including territorial disputes in the Aegean Sea, and have come to the brink of war three times since the 1970s, including once over drilling rights in the Aegean.

The accord “constitutes a raw violation of the law of the sea and of the sovereign rights of Greece and of other countries,” Dendias said, adding it was a deliberate attempt to create tension “both on a bilateral and on a regional level.”

Prime Minister Kyriakos Mitsotakis sought the support of fellow NATO members on the issue during an alliance meeting in London earlier this week.

Mitsotakis said the texts Ankara was referring to regarding maritime zones “are wrong geographically and historically, wiping Greek islands off the map and leading Turkey to an unprecedented diplomatic isolation.”

“We will do whatever we can for this deal not to apply,” Mitsotakis said during a speech in parliament Friday.

The two accords sparked outrage in the Libyan parliament, which is based in the east and aligned with the self-styled Libyan National Army. Lawmakers there denounced the deals as a “flagrant breach” of Libya's security and sovereignty, saying they grant Turkey the right to use Libyan airspace and waters as well as build military bases on Libyan soil.

Libya has been divided between two competing governments since 2015, one based in Benghazi in the east and the other based in Tripoli.

Libyan Foreign Minister Mohamed Taher Siala said during an interview on local Alahrar TV that Greece's expulsion of the ambassador was “unacceptable.”

“It is our right to reach understandings with those we wish. ... We would expel the Greek ambassador if they had any representation in Libya,” he said.

Turkish Foreign Minister Mevlut Cavusoglu slammed the removal of the Libyan ambassador as “not mature behaviour” and “outrageous.”

“Of course I condemn it,” he told a group of journalists on the sidelines of a regional meeting in Rome.

“Libya is a sovereign, independent state and the Libyan people give utmost importance to their dignity,” he said. “Expelling an ambassador for signing an agreement with another independent country is actually showing the real face of Greece.”

Cavusoglu defended the deals reached with Libya and said Turkey was prepared to reach similar agreements with other Mediterranean nations, apart from Cyprus - which Turkey does not officially recognize. Cyprus was split along ethnic lines in 1974 when Turkey invaded following a coup by supporters of uniting the island with Greece. Turkey is the only country to recognize a breakaway Turkish Cypriot state in the island's north, where it maintains 35,000 troops.

“Turkey is here to protect its own right within its continental shelf and within its maritime borders. This is what we are doing and what we will continue doing with other coastal countries,” he said.

Associated Press writers Derek Gatopoulos in Athens, Suzan Fraser in Ankara and Isabel DeBre in Cairo contributed to this report.