Historic US towns endured wars, storms. What about sea rise? 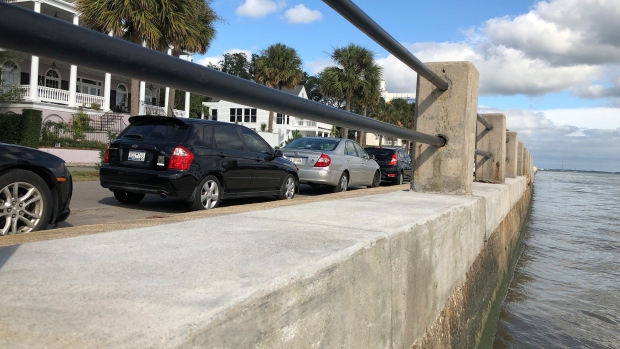 In this Tuesday, Oct. 8, 2019 photo, the sea wall called the Charleston Battery is seen in Charleston, S.C. Charleston and other governments are getting ready to spend around $100 million to raise the sea wall as sea levels rise because of climate change (AP Photo / Jeffrey Collins)

SWANSBORO, N.C. - Historic cities and towns along the Southeastern U.S. coast have survived wars, hurricanes, disease outbreaks and other calamities, but now that sea levels are creeping up with no sign of stopping, they face a more existential crisis.

With a total annual budget of $225 million, Charleston, South Carolina, can't afford the billions of dollars to save itself without federal help. It's counting on the U.S. Army Corps of Engineers to help surround its downtown peninsula with seawalls, harkening to the barriers the city built when it was founded 350 years ago.

Keeping water off the streets and buildings is even more difficult for smaller towns like Swansboro, North Carolina, with 3,200 people and a $4 million budget that doesn't account for climate-related sea rise.

The most vulnerable coastal communities sit only a few feet above sea level and are already getting wet at some high tides. Scientists estimate the sea will rise another 2 feet (61 centimetres) to 4 feet (122 centimetres) in the next 50 years.

Municipal leaders say they need billions of state and federal dollars to save block after city block of low-lying homes and businesses. And while even climate change-denying politicians are beginning to acknowledge the inevitable onslaught, city officials worry that those who control the purse strings won't see the urgency of a slowly unfolding catastrophe that's not like a tornado or earthquake.

Founded in 1783, Swansboro became the centre of North Carolina's steamboat industry. In 1862, it saw Union troops burn down a Confederate fort guarding the nearby Bouge Inlet to the Atlantic Ocean. Across its quaint downtown on the White Oak River, almost every building boasts a city seal with the date it was built. Most are much older than the gray-haired tourists strolling around, and can't forever withstand the kind of flooding they suffered last year, when Hurricane Florence's sea surge topped 30 inches (76 centimetres) of rain.

Stunned, the town commissioned a report for the future. It said the water's edge may end up a block or two inland from the historic waterfront, and soberly suggested: “Consider retracting services or strategically abandoning infrastructure in areas that are likely to be risky or dangerous.”

Local leaders recognize the importance of Swansboro's charm, but its future is largely out of their hands.

“We're going to be very, very dependent on outside funding,” new Town Manager Chris Seaberg said. “We're trying to preserve the history, but trying to accommodate these new issues that weren't there 100, 200 years ago.”

North Carolina passed a law in 2012 preventing the state from forming coastal polices based on sea rise predictions. But Republican control of the legislature is waning, and local leaders say hurricanes Matthew in 2016, Florence in 2018 and Dorian in 2019 - along with changing attitudes toward climate science- appear to be shifting the state's outlook. North Carolina created an Office of Recovery and Resiliency this year to plan for floods and other extreme weather events.

“There will need to be political stressors to get people to understand the importance of climate change,” said Beaufort, North Carolina, Mayor Rett Newton.

An Air Force retiree who is getting his PhD in marine science, Newton sweeps his arm across the Beaufort Channel. One spot is where the pirate Blackbeard scuttled some of his ships 300 years ago. Nearby is where blockade runners hid from British ships while helping supply the U.S. in the War of 1812. And on the horizon is where freed slaves helped Union troops defeat Confederates in 1862.

The historic buildings along Beaufort's waterfront are gleaming now, reflecting millions in new investment. It wasn't like that when Newton grew up in the 1960s amid grimy seafood shops, rundown shacks and fish plants. People wealthy enough to buy waterfront property can always move, Newton said, but escaping the seas will be much harder for poorer residents, who often live on low-lying land handed down through generations, are already beset by social and economic problems.

“I can't tax anyone else. At the local level, we can't tax our way out of this,” Newton said, noting his town of 4,200 people collects about $3.5 million a year in taxes.

Charleston, with state and federal help, is spending $64 million to raise the lowest part of the seawall guarding its downtown Battery, which should keep that part of the city safe even if the ocean rises more than 6 feet (2 metres) in the next century, Chief Resilience Officer Mark Wilbert said. The city also is spending hundreds of millions of dollars to modernize its storm water system.

But these measures alone probably can't save a city that was once the most heavily fortified in North America, with a system of walls, moats and drawbridges to keep out the Spanish, French, Native Americans, and occasionally the ocean as well.

The city's 7 million visitors each year come looking for old charm along the water, but probably not underfoot. Downpours regularly cause flooding these days, and more than once a week on average, Charleston gets “sunny day” flooding when tides push water onto city streets.

Four of the seven highest water levels recorded in Charleston Harbor have happened in the past four years, pushed by Hurricane Matthew in 2016, Hurricane Irma in 2017 and nor'easter type storms that hit in 2015 and 2018.

“What used to only happen occasionally is happening more often,” Wilbert said.

Charleston is working with the Army Corps on solutions, and everyone agrees sea walls aren't the only answer. Also under consideration are flood gates, enhanced pumps and other potential fixes, and the city hopes for plenty of state and federal help to pay for it.

South Carolina highway funds are already going to raise the downtown sea walls, and Republican Gov. Henry McMaster created the South Carolina Floodwater Commission, which is studying freshwater and ocean flooding and exploring the use of artificial reefs to blunt massive waves in hurricanes.

Charleston also plans to seek at least some of the state's tourism taxes on hotel rooms and restaurant meals for flood control. Currently, that money must be spent on tourism.

“You are not going to reverse this. The sea level is going to keep rising,” Wilbert said. “It's not something where you can say how much it will cost or when it will end.”