Iraqi court sentences 3 French members of IS to death 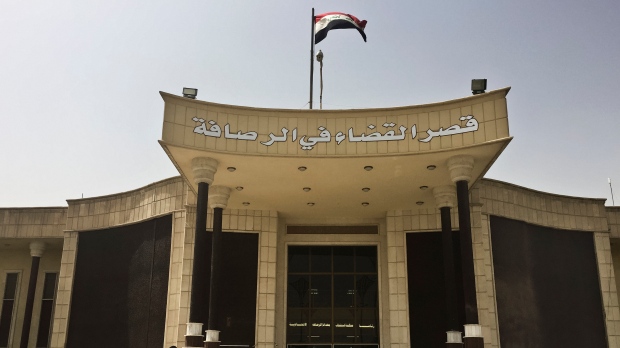 FILE - in this May 23, 2018 file photo, security guards stand outside the building where Islamic State militants are tried in a special counterterrorism court in Baghdad, Iraq. A Baghdad court sentenced to death three French citizens Sunday for being members of the Islamic State group, an Iraqi judicial official said. The official said the three were among 12 French citizens handed over to Iraq in January by the U.S.-backed Syrian Democratic Forces. Then SDF has handed over to Iraq hundreds of suspected IS members in recent months. (AP Photo/Maya Alleruzzo, File)

BAGHDAD -- A Baghdad court on Sunday sentenced three French citizens to death for being members of the Islamic State group, an Iraqi judicial official said. They were the first French IS members to receive death sentences in Iraq, where they were transferred for trial from neighbouring Syria.

The verdict raised new questions about the legal treatment of thousands of foreign nationals formerly with the extremist group. Many now languish in prisons in Iraq or detention camps in northern Syria. Their home countries hesitate to take back citizens they see as having gone willingly to join the militant group.

The official said the three were among 12 French citizens whom the U.S.-backed Syrian Democratic Forces handed over to Iraq in January. The Kurdish-led group spearheads the fight against IS in Syria and has handed over to Iraq hundreds of suspected IS members in recent months.

The convicted French militants can appeal the sentences within a month, according to the official, who official spoke on condition of anonymity because he wasn't authorized to speak to the media.

Iraqi President Barham Saleh had said during a February visit to Paris that the 12 will be prosecuted in accordance with Iraqi laws. In March, Prime Minister Adel Abdul-Mahdi asserted Iraq's authority to try foreign IS suspects detained in Syria because "the battlefields were one."

The trials of the French nationals in Baghdad raise the difficult question of whether foreign IS suspects should be tried and punished in the country of their alleged crimes, even when there are serious doubts about the impartiality of the courts in Iraq and Syria.

The thousands of men and women who came from around the world to join the self-styled Islamic caliphate have been left in limbo following the group's territorial defeat earlier this year in Syria.

The three men are the first French IS members to receive death sentences in Iraq. It wasn't immediately clear how France, which abolished the death penalty nearly four decades ago, will react to the sentence.

The trials are a test for how the international community handles the thousands of foreign nationals who stayed, or were trapped, with the Islamic State group through its dying days.

Iraqi prosecutors say the 12 French nationals are accused of belonging to IS, were parties or accomplices to its crimes, and threatened the national security of Iraq. Simply belonging to the extremist group is punishable by life in prison or execution under Iraq's counter-terrorism laws.

Judge Ali Hassan Jaafar, who presided over a closed-door court hearing, on May 2, to review the evidence that will be admitted to the trials, said the evidence showed all twelve men had crossed illegally into Iraq, when IS controlled part of the border between Syria and Iraq, and all twelve had committed crimes in the country.

But even if they were never present in the country, they could still be tried in Iraq under the country's wide-reaching counter-terrorism laws, he said.

In an interview with The Associated Press earlier this month, Judge Jaafar said the evidence against the 12 men included their personal testimonies, the fact that they were caught with IS in Syria, three propaganda videos or audio clippings published by the group, and IS documents recovered in Iraq by Iraq's security forces.

"The first piece of evidence against them is that they were found with IS, in Syria, in the last days of the organization's existence," said the judge. "What else could they have been doing there?"

A French diplomatic official, speaking to the AP earlier this month on condition of anonymity to speak freely about policy, said France recognizes the right of Iraq to try people for crimes committed in Iraq.

But human rights groups and advocates of the men in France say it is not certain that the men committed crimes in Iraq, or if they were even ever in the country. They also doubt the impartiality of the courts, which have handed down hundreds of death sentences to Iraqi suspects in trials that run for just a few minutes.

"There's zero presumption of innocence when they walk into the courtroom," said Belkis Wille, the senior Iraq researcher at Human Rights Watch.

The U.N. envoy for Iraq, Jeanine Hennis-Plasschaert, said member states bear primary responsibility for their own nationals, including the treatment of their citizens in accordance with international law.

"Normatively, one would expect and hope that individual states take back their nationals to process, prosecute, and deradicalize them," she said, in response to a query from AP. She said the U.N.'s human rights office regularly attends trials as part of its broader trial monitoring program but does not comment publicly on individual cases.

Iraq has detained or imprisoned at least 19,000 people accused of connections to IS or other terror-related offences, and sentenced more than 3,000 of them to death, according to an analysis by the AP last year.