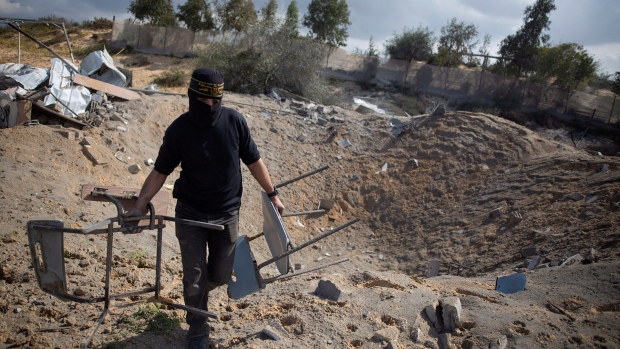 JERUSALEM - The Islamic Jihad militant group in the Gaza Strip announced a unilateral cease-fire on Monday, calling for a halt after two days of intense fighting with Israel, just a week before the country's national elections.

Israeli aircraft had pounded dozens of targets in the Gaza Strip throughout the day while Islamic Jihad militants bombarded southern Israel with heavy rocket fire before the cease-fire announcement Monday evening. Israel also expanded its retaliation to Syria, where some of the Iranian-backed group's leaders are based, killing two more Islamic Jihad militants.

There were no reports of civilian casualties on either side.

In a short statement, the Iranian-backed group's armed wing said it had completed its “retaliation” for the killing of its three members. But it vowed to respond to any further Israeli “aggression.”

Israel continued to strike targets in Gaza for nearly an hour after the announcement, then appeared to halt its activity. But later Monday evening, at least two rockets were fired out of Gaza, raising the prospect of renewed fighting.

Earlier in the day, Prime Minister Benjamin Netanyahu, locked in the final days of a divisive election campaign, ramped up his rhetoric. He threatening Gaza's Hamas rulers with a stepped-up operation if the rocket fire continued.

“I'm talking about a war,” he told Israel's Army Radio station. “I only go to war as a last option, but we have prepared something you can't even imagine.”

Despite the tough rhetoric, both sides had an interest in ending the fighting quickly.

For Netanyahu, the violence drew unwanted attention to Israel's volatile southern border with Gaza, where his government has struggled to halt years of attacks and rocket fire by militant groups. Islamic Jihad, meanwhile, has been exposed in the past few months as a relatively weak and disorganized group - one that acts more as a spoiler capable of undermining cease-fire efforts than a serious military threat to Israel.

In recent months, Israel has worked with U.N. and Egyptian mediators to cement an informal cease-fire with Hamas, the much larger Islamic militant group that has governed Gaza for more than a decade. These “understandings” have eased a painful Israeli blockade that has ravaged Gaza's economy, in exchange for Hamas guarantees to maintain quiet.

The United Nations' Mideast envoy Nickolay Mladenov, a key player in the truce efforts, had tweeted Monday calling for “an IMMEDIATE stop to the firing of rockets that only risks dragging Gaza into another destructive round of hostilities with no end in sight!”

While Hamas has honoured the truce, Islamic Jihad has continued to carry out attacks. The latest round of fighting erupted early Sunday after Israel killed an Islamic Jihad militant it said was planting explosives along the border.

An Israeli military bulldozer pushed into Gaza to retrieve his body. Footage of the bulldozer lifting the lifeless body and dangling it off the front of the vehicle quickly spread on Palestinian social media, drawing angry comments and putting pressure on the militants to respond.

Islamic Jihad militants began firing rockets late Sunday, and had launched 80 rockets by the time the cease-fire was announced, according to the Israeli military. It said over 90% of the rockets were intercepted. But one projectile slammed into an empty playground in the southern Israeli town of Sderot, causing damage to a large slide.

It was the heaviest round of fighting since November, when Israel and Islamic Jihad engaged in a two-day battle after Israel killed one of the group's top commanders.

The latest Israeli airstrikes targeted only Islamic Jihad positions. But Israel holds Gaza's Hamas rulers responsible for all fire coming out of the coastal enclave, and could expand its response.

Israel and Hamas have fought three wars and numerous skirmishes since the Islamic militant group seized control of Gaza from the internationally recognized Palestinian Authority in 2007.

Still, Netanyahu appeared to be reluctant to pick a fight with Hamas so close to next Monday's election. Hamas is much more powerful than Islamic Jihad, and it has shown itself capable of barraging Israel with rocket fire for weeks at a time.

Hamas, which remained on the sidelines, also has little interest in renewed fighting at a time when it is trying to improve living conditions for the territory it controls.

Netanyahu's opponents have criticized him for his understandings with the group, accusing him of caving in to violence to keep things quiet.

“Netanyahu, the country is under fire. Get on helping it,” said Netanyahu's chief rival, former military commander Benny Gantz, leader of the opposition Blue and White Party. “The people of the south deserve better.”

The election will be Israel's third in under a year, after two inconclusive votes last year.

Netanyahu, locked in a tight race with Gantz, has tried to focus the campaign away from his upcoming trial on corruption charges by presenting himself as an experienced statesman who is best-suited to protecting Israel's security. He appeared to have little interest in prolonged fighting so close to election day.

Tamar Hermann, an expert on Israeli public opinion at the Israel Democracy Institute think-tank , said that after so many previous rounds of fighting, she did not expect the latest violence to have an impact on voters.

“It's expected and people are used to it, and resilience is not being eroded because of such `normal events,”' she said.