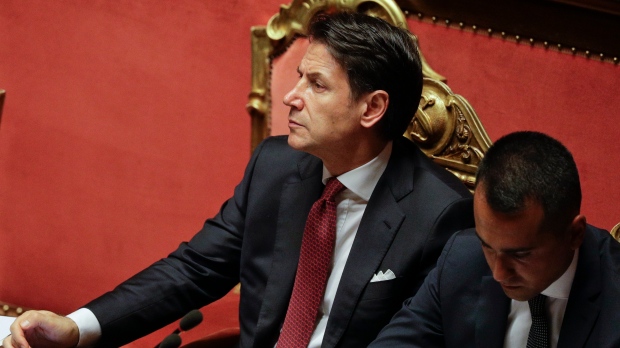 Italian Premier Giuseppe Conte, left, sits beside Deputy-Premier Luigi Di Maio at the Senate in Rome, Tuesday, Aug. 20, 2019. Conte blasted the League's leader and Interior Minister Matteo Salvini for his decision to spark a government crisis that risk triggering "a spiral of political and financial instability." Conte addressed the Senate on Tuesday in a much-awaited speech after Salvini's far-right League two weeks ago landed a no-confidence vote against Conte's government pushing it on the verge of collapse. (AP Photo/Gregorio Borgia)

ROME - Italian Premier Giuseppe Conte announced his resignation Tuesday, blaming the collapse of his 14-month-old populist government on his rebellious and politically ambitious deputy prime minister who triggered a political crisis in a gambit to force early elections that could bring the right-wing, anti-migrant leader to power.

Addressing the Senate, Conte scathingly quoted Matteo Salvini's own recent demands for an early election so he could gain “full powers” by grabbing the premiership. He blasted Salvini for putting Italy at risk for a “dizzying spiral of political and financial instability” in the months ahead by creating an unnecessary crisis that ends a working government.

Salvini, who sat next to Conte, smirking at times, began the Senate debate by saying, defiantly, “I'd do it all again.”

Pressing for elections as soon as possible, Salvini, who as interior minister has led a crackdown on migrants, said: “I don't fear Italians' judgment.”

Conte said he was going later Tuesday to tender his resignation to President Sergio Mattarella, who might ask him to stay on in a caretaker role ahead of any new elections or while he determines if someone else can cobble together a viable government.

In the European Parliament election three months ago in Italy, as well as in current opinion polls, Salvini's right-wing League party has soared in popularity to be the No. 1 political force among Italians.

Should any early elections sweep Salvini into the premiership, financial markets could be rattled by his Euro-skepticism.

In his Senate speech, Conte blasted Salvini's surprise move earlier this month to seek a no-confidence vote against the coalition.

“The crisis underway compromises the action of this government, which stops here,” Conte said, anticipating his announcement of imminent resignation.

While oft-bickering, the government reflected the results of Italy's 2018 election and aimed to “interpret the desires of citizens who in their vote expressed a desire for change,” Conte said.

Depicting himself in counterpoint to Salvini's often derogatory depiction of European Union rules, Conte said: “I tried in these 14 months, to guide Italy's policy along the path of a critical pro-Europe line, but always oriented constructively.”

If the current crisis seems unsolvable, Mattarella could immediately dissolve Parliament, 3 1/2 years ahead of schedule, as Salvini has been clamouring for. Pulling the plug on Parliament sets the stage for a general election as early as late October, right smack in the middle of delicate budget manoeuvrs that will be closely monitored in Brussels, concerned about Italy's shaky finances and long stagnant economy.

In an indication of the acrimony between the two men, Salvini seemed to want to provoke the premier even as Conte, standing right next to him, delivered his speech in Parliament's open house.

Salvini repeatedly kissed a rosary he slipped out of his pocket, right after Conte rebuked him for associating “political slogans with religious symbols.” Salvini has taken to dangling a rosary and invoking the protection of the Virgin Mary in political rallies around the country, even though no election campaign is underway.

The premier said besides “risking offending the feelings of the faithful” in the predominantly Roman Catholic country, Salvini's showy use of religious symbols “darkens the principle of laity in a modern state.”

Conte, a lawyer with no political experience, is nominally nonpartisan, although he was the clear choice of the 5-Stars when the government was formed. He led a coalition that included two rivals, the anti-establishment 5-Star Movement and Salvini's League party.

Outside the Senate, a few groups of citizens rallied in support for the man they hoped would be the next premier. Some hoisted “Salvini for premier signs,” others held 5-Star banners, while still others waved signs saying “We're with you, Conte.”