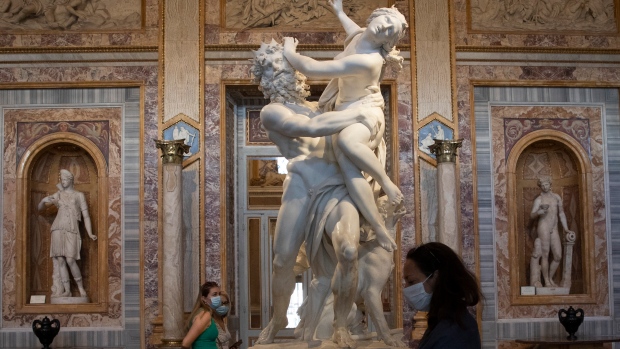 VENTIMIGLIA, Italy - Italy officially ended its long coronavirus lockdown Wednesday, opening regional and international borders in a bid to boost summer tourism, but found itself alone as European neighbours viewed the move as premature and remained wary of visitors from Italy.

Italy's long-awaited internal and external opening after nearly three months allowed residents to finally reunite with friends and family members, and brought a flood of French shoppers across the border for less expensive groceries and cigarettes. But normalcy was a long way off.

Giuseppina Niglio drove 8 1/2 hours from Salerno, south of Naples, to the border with Switzerland to see her children, Roberta di Giacomo, 24, and Alessandro di Giacomo, 21. The siblings study at the musical conservatory in Lugano, Switzerland. They crossed into Italy on foot with their luggage, her cello and his violin.

Italy is the first European country to fully open its international borders, dropping the 14-day quarantine requirement for visitors from most of Europe. Many European nations are waiting until June 15 to open their borders, and some much later than that.

Who gets to go where in Europe this summer is shaping up to be determined by where you live, what passport you carry and even how hard hit your region has been during the pandemic.

Italian Premier Giuseppe Conte criticized as “discriminatory” moves by Austria and Greece to limit the arrivals of Italians in their countries, due to concerns over the level of contagion in some regions, notably Lombardy.

“The health emergency is now behind us,” Conte said during a news conference, adding that he was working to reverse restrictions on Italian travellers.

Indeed, Europe-wide, rules on cross-border travel were a patchwork of regulations.

Even within Italy, regions with fewer residents infected with the virus viewed with some trepidation the arrival of tourists form the country's harder-hit north. A move by Sardinia to require some form of testing for people coming from other parts of Italy was rejected by the Rome government as unconstitutional. A requirement for visitors to register before their arrival took the place of the proposed measure.

Germany said Wednesday that it plans to lift a travel warning for European countries from June 15 but it may still advise against travel in some cases, for example to Britain if quarantine rules there remain.

Austria said it is ending border checks with all its neighbours except for Italy, due to lingering concerns about coronavirus infections there, particularly hard-hit Lombardy.

Greece last week announced that visitors from 29 countries would be subject to random coronavirus testing and no quarantine. After protests from Italy, Spain and other countries not included, Greece clarified that its criteria applied to individual airports, not entire countries. For example, passengers on flights from Rome will subject to the looser entry rules, but those from northern Italy will still need to undergo more stringent screening.

Italy's neighbour, France, also is looking at opening its borders on June 15 - although French citizens who cross over in the meantime are no longer subject to quarantines upon their return. Their absence had been sorely felt in the border down of Ventimiglia, where stall owners in the local market say they are responsible for 90% of sales.

But on the first day of open borders, Italians who cross into France for work every day - who number around 7,000 - found waits of two to three hours as French authorities apparently increased checks due to Italy's relaxing of internal controls, Martino Santacroce, chief of Ventimiglia's Border Police branch, told The Associated Press.

In a sign of continued caution regarding outsiders, the Czech Republic and Slovakia - a single nation before the fall of communism - planned to open their common border as of Thursday while keeping checks in place for visitors from other places.

The British government was confirming plans Wednesday to impose a 14-day quarantine for people arriving in the country starting next week, despite pleas from the travel industry to drop the idea and criticism from others that the move comes way too late to tamp down the country's coronavirus outbreak.

Britain has seen nearly 39,500 deaths linked to the virus, the highest death toll in Europe and second-highest in the world after the United States. Europe overall has recorded 175,000 deaths during the pandemic.

Britain is also talking to other countries about setting up “air bridges” that would allow certain countries or regions to be exempted from quarantine rules. In a similar vein, Spain's Balearic Islands are reaching out to German states to find ones with epidemiological conditions that “match” those of the best-situated islands.

Italy is the odd country out on such deals. It was the first country in the West to be struck by the virus and for more than a month had the world's highest death toll. Many other countries still consider Italy unsafe to visit and require their citizens who have been there to self-quarantine upon return, effectively discourages foreign tourism.

Particularly crippled have been high-end hotels that rely on foreigners to fill their rooms. In Rome, the 4-star Grand Hotel Gianicolo is only now receiving reservations from some French, German and Dutch guests for late summer.

Despite the bleak outlook, the staff motto is “Keep going, don't give up,” said sales manager Antonino Sacca'.

Barry reported from Soave, Italy and Moulson from Berlin. Journalists from throughout Europe contributed.