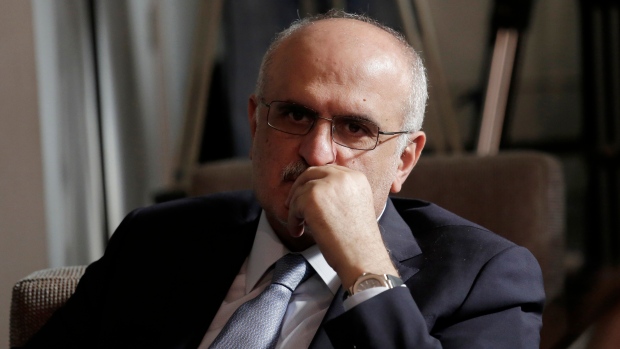 In this May 24, 2019 file photo, then Lebanese Finance Minister Ali Hassan Khalil listens to Lebanese Information Minister Jamal Jarrah while he speaks to a journalist at the Government House in Beirut, Lebanon. On Tuesday, Oct. 12, 2021, Lebanon's state news agency said the judge leading the investigation into last year’s massive explosion at Beirut’s port has issued an arrest warrant for Khalil after he didn't show up for questioning. It wasn't immediately clear if and when the former finance minister and current member of parliament would be detained. (AP Photo/Hassan Ammar, File)

BEIRUT (AP) - The judge leading Lebanon's probe into last year's massive Beirut port explosion issued an arrest warrant Tuesday for a former Cabinet minister, a show of defiance against an entrenched political class that has closed ranks against him.

Judge Tarek Bitar issued the warrant shortly before he was notified of a much-anticipated lawsuit filed by two defendants seeking to remove him from his post, Lebanon's National News Agency reported. The lawsuit automatically suspended the investigation, the second time in less than a month that defendants have managed to curtail it.

The developments came hours after harsh criticism was leveled against Bitar by Lebanon's powerful Hezbollah leader Hassan Nasrallah. Nasrallah called Bitar's investigation a “big mistake” and said it was biased. He asked authorities to remove Bitar.

Tuesday's events marked the latest twists in the saga of the troubled investigation into the massive August 2020 blast at Beirut's port that killed at least 215 people, injured thousands more and devastated entire neighborhoods of the Lebanese capital.

They highlighted the cat-and-mouse game between the judge, who was appointed by a government body but known for his independence and integrity, and former government officials who have used parliamentary immunity and legal challenges to avoid answering to him.

Hundreds of tons of ammonium nitrate, a highly explosive material used in fertilizer, had been improperly stored in the port for years with apparent prior knowledge of many of the country's top leaders.

Bitar charged Ali Hassan Khalil, Lebanon's former finance minister and current member of parliament, and three other former senior government officials with intentional killing and negligence that led to the deaths of scores of people in the port explosion. It wasn't immediately clear if Khalil would be arrested after the warrant.

“It is a ludicrous attempt to evade justice,” said Aya Majzoub, a Human Rights Watch Lebanon researcher. She said the politicians implicated in the case filed all the complaints they can think of with the intention of getting the investigation suspended.

They may succeeded in suspending the probe long enough to once again obtain parliamentary immunity next week, she said. Parliament is currently in recess, offering Bitar a window of opportunity to summon officials that have so far used immunity to avoid answering to him.

Lebanese lawyer Nizar Saghieh said attacks on Bitar are getting more intense and the pressure is rising to remove the probe from him.

“The judge is on his own. ... No one is defending him,” Saghieh, who heads the rights group Legal Agenda, told Al-Jadeed TV station. (asterisk)(asterisk)Saghieh does not represent Bitar.

Lebanon is a small nation notorious for corruption, where a culture of impunity has prevailed for decades among the entrenched political elite.

The 46-year-old Bitar is known among his colleagues as a professional and daring judge who has in the past issued swift verdicts, including several death sentences in murder cases and lengthy punishments against drug dealers. Bitar also issued hefty fines against two doctors who were convicted of malpractice in a medical mishap in which an infant's legs were amputated.

Bitar is known for having no history of political affiliation.

Families of the port blast victims have rallied behind Bitar, who has skillfully maneuvered through Lebanon's legal system to summon senior officials while - so far - avoiding charges of violating the constitution

It is rare in Lebanon for a judge to face off against members of a political class blamed for corruption and mismanagement that threw the small country into its worst economic crisis in its modern history starting in late 2019.

Lebanese politicians including Nasrallah, former Prime Minister Saad Hariri, and some religious figures have launched a campaign to discredit Bitar, accusing him of being politicized and biased.

Bitar has not responded to the criticism and has kept his investigation secret so far.

Saghieh, the lawyer, said only the Court of Cassation, Lebanon's highest court, could decide to remove Bitar. It is the same court that removed his predecessor earlier this year, when senior government officials implicated in the case filed a lawsuit raising “legitimate suspicion” against him.

Bitar already faces such a lawsuit and Saghieh said a decision could come in six to eight weeks.

Bitar was appointed in February by a government body. The same body could take disciplinary action against him, but it is currently not fully formed. His removal, if it happens, would be a major blow to the investigation and the already undermined judiciary.