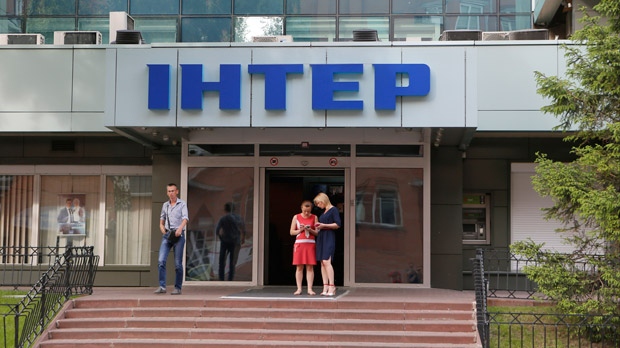 People walk out off of Inter TV channel in Kiev, Ukraine,Tuesday, May 26, 2015. A showdown between Ukrainian government and the popular television station with former links to the Russian government has long been brewing. Supporters of the station say attempts to drag it down are part of a political witch-hunt. (AP Photo/Sergei Chuzavkov)

KYIV, Ukraine -- Crunch time is coming in a Ukrainian showdown that may yield clues into an increasingly asked question: How free is the press in Ukraine as it fights to stay out of Russia's orbit?

The Kyiv government has enjoyed EU and U.S. support as it strives to forge a pro-Western path and battles a pro-Russian insurgency that critics say is supported by the Kremlin. But fears are mounting that in navigating these troubled times, the government is curbing media freedom as it seeks to win the battle of hearts-and-minds against Moscow.

The case in the spotlight involves a popular television station with former links to the Russian government. A moment of truth comes Thursday when the national television and radio broadcasting council meets on whether to rescind the Inter channel's broadcasting license, following accusations of "destructive behaviour" by prominent members of Parliament.

Inter has faced a deluge of criticism in the legislature for its purported pro-Russia stance, and faces criminal investigations that supporters of the station call a political witch-hunt to drag it down.

Inter has not yet been explicitly accused of sympathizing with the pro-Russia rebels, but the station's perceived lack of patriotic fervour is enough to warrant its closure for some. Parliament member Andriy Levus said the legislature's national security committee, on which he sits, last week demanded that Inter and Russian-language newspaper Vesti be investigated by the authorities for the alleged destructive activities.

"The committee has found that these so-called media represent a danger to national security and are destabilizing the social situation by creating a receptive setting for Russian aggression," Levus, who served until November as deputy head of security services, wrote on his Facebook page last week.

The threat to Ukraine posed by Inter, according to Levus and likeminded figures, arises from its critical reporting. Inter and Vesti regularly dwell on the fallout of the severe austerity program being imposed by the government, as Ukraine tries to burrow its way out of penury.

"There is no basis for a negative decision," Inter chairman Yegor Benkendorf said in a statement. "Any speculation on this subject should not be based on legal grounds. This is about politics."

But the station's pedigree is enough to generate suspicion in Ukraine. The station's minority shareholder is Serhiy Lyovochkin -- a wealthy former loyalist of deposed Moscow-friendly President Viktor Yanukovych, and a leading figure in the staunchly anti-government Opposition Bloc in parliament.

Until February, Russia's state-controlled Channel One held a 29 per cent share in the station. And suspicions flared after a New Year's Eve program featuring performers who have publicly backed the armed separatist insurgency in east Ukraine. The TV show sparked the first concerted drive for the channel's closure.

On Monday, the Interior Ministry announced it was initiating a probe into Inter on two counts. One involves the alleged unauthorized partial privatization of the station in the 1990s, which the police say incurred the state $800 million in financial damages. Police are also investigating claims that unnamed founders of the channel pressured journalists working at the station to influence their reporting.

The station has decried the probes as an assault on media liberties.

"We see these steps as pressure on freedom of speech and a systematic assault on independent media, caused by the fact that Inter's news shows feature stories on corruption in the government," the station said in a statement Tuesday.

As with much else in Ukraine, the story with Inter is in equal part about politics and money.

"In Ukraine, there has on one hand been a proliferation in the non-transparent sale of media companies, particularly television stations," said Alexander Tarasov, a lawyer with the Independent Media Trade Union of Ukraine. On the other, Tarasov said, Inter does now appear to have been selectively targeted for attention on political grounds.

Suspicions are rife that pressure against critics of the government in the media has also taken on more sinister forms. In mid-April, Oles Buzina, an outspoken reporter known for his sympathies to Russia, was shot dead near his home in the centre of Kyiv. Authorities appear no closer to cracking the case now than they there were in the days after the murder. While few have openly linked the murder to the authorities, government critics have noted the allegedly lackadaisical police pursuit as grounds for concern.

Russian Foreign Ministry representative Konstantin Dolgov suggested Buzina's killing was part of a broader wave of political terror in Ukraine being levelled against dissidents. Ukrainians scoff at the notion that complaints should come from a country that regularly scores near the bottom of international press freedom rankings.

But the trend in Ukraine seems inexorably veering toward restrictions instead of the freedoms that many had hoped would flourish after Yanukovych was toppled in a mass uprising last February.

A law came into effect earlier this month that criminalizes the act of positively assessing the era of Soviet rule in Ukraine from 1917 to 1991.

Dunja Mijatovic, media representative for the Organization for Security and Cooperation in Europe, said in a statement issued after the legislation was approved that the rules set a worrying precedent.

"Disproportionate restrictions on media freedom can never be justified in a democratic state," Mijatovic said. "Potentially problematic speech should not be banned, on the contrary, it should be addressed through an open debate."