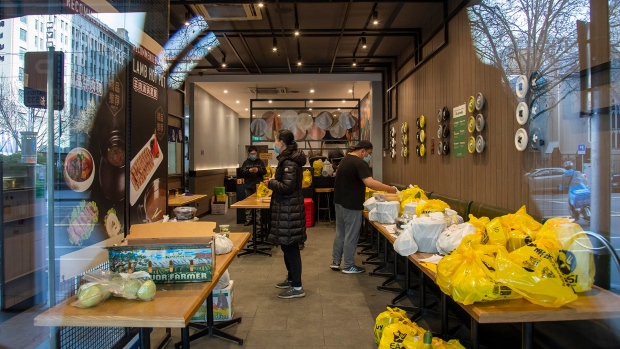 A restaurant prepares delivery meal orders during lockdown due to the continuing spread of the coronavirus in Melbourne, Thursday, Aug. 6, 2020. Victoria state, Australia's coronavirus hot spot, announced on Monday that businesses will be closed and scaled down in a bid to curb the spread of the virus. (AP Photo/Andy Brownbill)

SYDNEY, Australia -- Australia has reported the fewest number of new daily cases in its virus hotspot, Melbourne, since last month. But it also reported the nation's highest daily death total since the virus outbreak began.

The state of Victoria reported 322 new infections and 19 new deaths on Monday, with 14 of the deaths connected to outbreaks at aged-care facilities.

Australian Prime Minister Scott Morrison said he was more hopeful now that cases are stabilizing in Victoria than he has been at any time over the past week.

But state Premier Daniel Andrews cautioned that not too much could be read into a single day's worth of data, and that some of the state's most stringent lockdown measures had only come into effect at midnight Sunday.

The number of new cases was the lowest recorded in Victoria since July 29.

The figures did not include new infections and deaths from other Australian states, although Victoria has been accounting for the vast majority of both in recent weeks.

Since the outbreak began, Australia has reported more than 21,000 infections and more than 300 deaths.

- China's number of local transmissions fell to just 14 but was offset by 35 new cases among Chinese travellers coming from overseas. All of the new local cases reported Monday by the National Health Commission were in the northwestern region of Xinjiang, whose main city Urumqi is the centre of China's latest outbreak. China has reported 4,634 fatalities from the disease among 84,668 cases. Hong Kong reported another 72 cases and five deaths as it continues to battle a new wave of infections with tightened rules on indoor dining and obligatory mask wearing in public settings. The semi-autonomous Chinese city has reported 52 deaths among 4,079 total cases.

- Sri Lanka has started reopening schools nearly five months after they were shut down to contain the spread of the virus. The government's move to reopen schools from Monday comes as health authorities say that they have successfully brought the coronavirus under control. Under the reopening plan, students in grades 5, 10, 11, 12 and 13 will attend school every day because they need to be prepared to for government examinations. Students in grades 1, 2, 3, 6, 7 and 8 will attend a single day per week, while students in grades 4 and 9 will come two days per week. Sri Lanka has reported 2,841 coronavirus cases and 11 deaths.

- Former Indian President Pranab Mukherjee says he has tested positive for the coronavirus. Mukherjee, 84, said Monday that he found out he was positive when he went for a routine medical check-up. He requested all those who came in contact with him in the last week to isolate themselves and get tested. Mukherjee was India's president between 2012 and 2017. Over the last few weeks, several Indian political leaders have either tested positive or gone into quarantine. India has nearly 2.3 million confirmed cases of the coronavirus, the third-highest number in the world after the United States and Brazil. At least 44,386 people have died. The country has been reporting an average of about 50,000 new cases a day since mid-June.