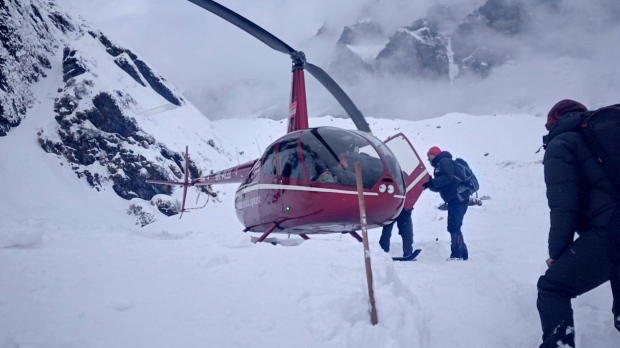 In this Saturday, Jan. 18, 2020 photo, trekkers are being rescued in an helicopter a day after after an avalanche hit Mount Annapurna trail in Nepal. (AP Photo/Phurba Ongel Sherpa)

The avalanche hit part of the Mount Annapurna trekking route on Friday after heavy snowfall earlier in the week. All other trekkers who were in the area have been safely rescued and flown to safer areas, Department of Tourism official Mira Acharya said.

South Korea's foreign ministry said the missing trekkers are two women in their 30s and 50s and two men in their 50s and are teachers who were staying in Nepal for volunteer work.

In photos taken early last week, sunshine hit bare and grassy mountain slopes. Two days of snowfall followed, and by Friday, snow was neck-deep and several avalanches had occurred, a veteran mountain guide who was helicoptered out of the area said.

“We had crossed the area just three hours before the big avalanche hit the area, which has a few rest stops and lodges,” Phurba Ongel Sherpa told The Associated Press on Monday.

On the way back, he said he saw the area from the helicopter where the avalanche had hit and it was covered with snow.

“There is no way that anyone buried in that pile could have survived,” he said.

Sherpa has climbed the world's highest and second-highest peaks, Mount Everest nine times and K2 once.

He said communication was cut off because of the weather. His family had been worried after news of the avalanche because his team was also comprised of four South Korean trekkers and three Nepali guides.