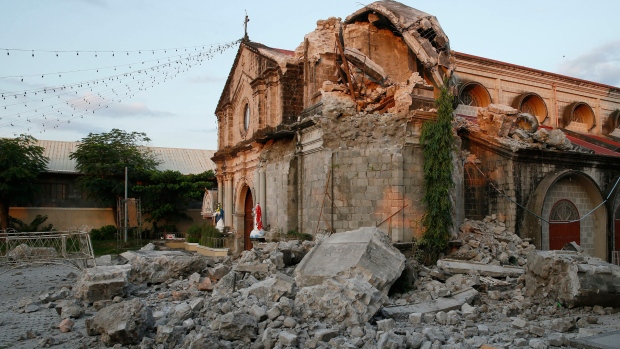 Damaged St. Catherine church is seen following a 6.1 magnitude earthquake that also caused the collapse of a commercial building in Porac township, Pampanga province, north of Manila, Philippines, Tuesday, April 23, 2019. The strong earthquake struck the northern Philippines Monday trapping some people in a collapsed building, damaged an airport terminal and knocked out power in at least one province, officials said. (AP Photo/Bullit Marquez)

MANILA, Philippines - Philippine police investigators have summoned the owner of a four-story supermarket that collapsed in a powerful earthquake and is feared to have trapped dozens of people, officials said Wednesday.

Chuzon Supermarket owner Samuel Chu on Tuesday appeared at a police station in Porac town in Pampanga province, north of Manila, at the start of an investigation on suspicion the building's construction may have breached regulations, said police Director General Oscar Albayalde.

At least five bodies and nine survivors have been pulled out from the rubble of the supermarket. Monday's quake, which was caused by movement in a local fault, left at least 17 people dead, mostly in Pampanga and nearby Zambales provinces.

Porac Councilor Maynard Lapid said there were no more reports of missing people and rescuers with sniffer dogs were no longer detecting any sign of life in the rubble. Rescuers and workers, however, would continue excavation work in the huge pile of concrete, twisted metal sheets and wood, he said.

Another powerful but unrelated temblor struck the central Philippines Tuesday but was too deep to cause any major damage. Ten people were injured by the quake, which was centred near the town of San Julian in Eastern Samar province, according to the government's disaster-response agency.

Chu could face possible criminal complaints from relatives of victims. Authorities and government engineers were investigating if the construction of two additional floors at the supermarket complied with standards and regulations, Albayalde said.

Other Chuzon supermarkets were ordered to temporarily close to allow safety inspections, he said.

In a televised meeting in Porac late Tuesday, President Rodrigo Duterte asked authorities to check if the pillars of the supermarket, which officials said was originally built as a two-story building about two years ago, could withstand the additional two floors.

Duterte said the crumbling of the supermarket “was appalling” and raised a lot of questions since adjacent buildings, including a government gym, did not collapse.

In Manila, a traffic-prone street was partially closed after a college building was damaged by the quake and appeared to tilt slightly toward an adjacent building, officials said. Other buildings swayed as the ground shook and water from one Manila high-rise swimming pool splashed down like a waterfall.

One of the world's most disaster-prone countries, the Philippines has frequent earthquakes and volcanic eruptions because it lies on the so-called Pacific “Ring of Fire,” a seismically active arc of volcanos and fault lines in the Pacific Basin.