Poland to Ukraine: choose between Russia or EU 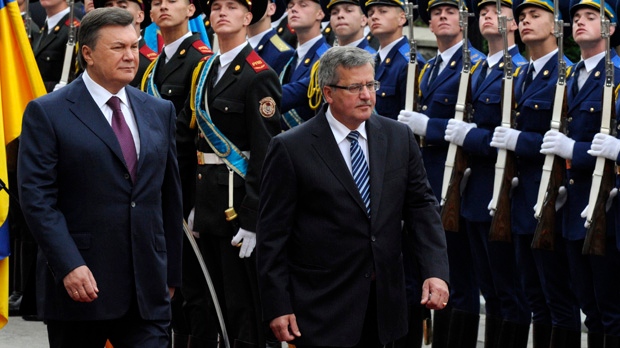 Ukrainian President Viktor Yanukovych, left, and Polish President Bronislaw Komorowski review an honor guard during a ceremony ahead of their meeting in Kiev, Ukraine on Thursday, Sept. 20, 2012. (AP Photo/Sergei Chuzavkov)

KIEV, Ukraine -- Polish President Bronislaw Komorowski urged Ukraine's leader on Thursday to push for integration with the European Union, but acknowledged that a key obstacle is the country's jailing of its former premier, Yulia Tymoshenko.

After talks with Ukrainian President Viktor Yanukovych in Kyiv, Komorowski said Ukraine must decide whether it wants to align itself with the EU or join a Russia-led customs union. "It is impossible to implement those two scenarios at the same time," Komorowski said at a news conference with Yanukovych. "A choice has to be made."

Tymoshenko, the country's top opposition leader and the heroine of the 2004 Orange Revolution, is serving a seven-year jail term on charges of abuse of office while leading natural gas import negotiations with Russia in 2009.

Tymoshenko, 51, denies the charges and accuses Yanukovych, the antagonist of the Orange Revolution, of throwing her in jail in order to bar her from Ukraine's Oct. 28 parliamentary election.

The nation's relations with the EU have been strained over her treatment, which the West has condemned as politically motivated. The EU has balked at implementing a key co-operation deal with Ukraine over the Tymoshenko case.

"The Tymoshenko case is an internal matter of Ukraine, but at the same time this case is a serious, significant obstacle in the rapprochement between Ukraine and the European Union," Komorowski said. "From our side we expect that all Ukrainian political players will work toward removing these obstacles which hamper the ... integration of Ukraine with European structures."

Yanukovych skirted a question on whether he could pardon Tymoshenko, who also faces an array of other accusations, including in connection with a 15-year-old murder case.

"The (legal) process in the case of Tymoshenko is not over yet," Yanukovych said at the news conference. "We are interested and will do everything so that all the cases take place only in the legal framework."

Tymoshenko is undergoing treatment in a Ukrainian hospital for a severe spinal condition which has left her partially paralyzed and in constant pain. She has been unable to attend trials and take part in investigations in cases against her.

"Yanukovych has shown his true face. He has shown that he doesn't understand European values, European democracy and what a leader of a European country should be like," Vlasenko told The Associated Press.