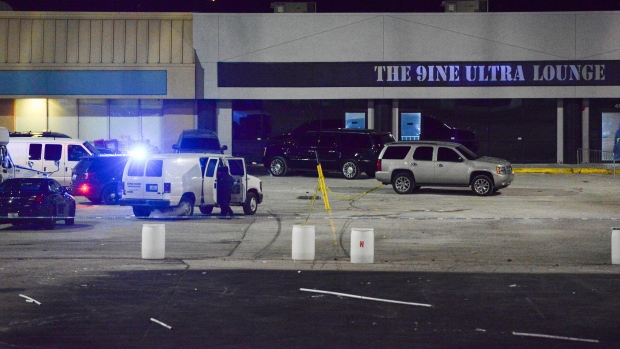 Kansas City, Mo., police crime scene investigators gather evidence at the scene of a shooting at a nightclub in the early hours of Monday, Jan. 20, 2020, in Kansas City, Mo. Police say an armed security guard may have shot and killed a man suspected of fatally shooting a woman and injuring 15 more people outside a bar in Kansas City(Luke Nozicka/The Kansas City Star via AP)

KANSAS CITY, Mo. - An armed security guard saved several lives when he shot and killed a heavily armed man who opened fire on a line of people waiting to get into a Kansas City, Missouri, bar, killing one person and wounding at least 15 others, Kansas City's police chief said Monday.

Police were still trying to determine a motive for the late Sunday shooting at the 9ine Ultra Lounge in eastern Kansas City that created a chaotic scene as hundreds of patrons fled the scene on foot and in cars, police Chief Richard Smith said.

“We know that there were multiple firearms involved, so we think the security guard's actions definitely saved lives,” said Smith.

The security guard, whose identity was not released, fatally shot Jahron Swift, 29, of Kansas City, police said. The woman who died was identified as Raeven Parks, 25, of Kansas City. It was not known if there was any connection between Swift and Parks, Smith said.

The security guard, who is licensed to be a guard but is not an off-duty officer, heard the disturbance from inside the bar and went outside and confronted the shooter, Smith said. Police officers didn't fire any shots at the scene.

Police said three of the 15 people who were injured suffered critical injuries but Smith added that those numbers could change as more witnesses are interviewed. He could not say if all the injuries were gunshot wounds. It was also not clear Monday what types of firearms were used but Smith said there was no evidence that anyone other than the suspect shot at the victims.

A Facebook post on 9ine Ultra Lounge's page advertised Sunday night's “Sold Out Sundays” event, which appeared to be a celebration of the Kansas City Chiefs. The Chiefs - featured on the event's artwork - beat the Tennessee Titans on Sunday to advance to the Super Bowl.

The club was on police's radar because of a drive-by shooting in the parking lot about a week ago. Smith said officers also interviewed several people who complained about incidents at the club in the past.

Smith and Mayor Quentin Lucas both expressed frustration that the shooting marred what was otherwise a happy and uplifting day in Kansas City. The shooting also came as Kansas City continues to grapple with a high rate of fatal shootings.

“We've got a problem in Kansas City,” Lucas said. “We've said a few times that it is an epidemic of gun violence. We're losing too many lives, we had too many shot each year. We will remain committed, both at city hall and the police department, and every agency in Kansas City is making sure that we stop this problem.”

A lack of co-operation from witnesses has contributed to Kansas City's gun violence, both officials said. They noted several theories about what happened at the club were circulating on social media but few people had called investigators to offer help.

Smith said the shooting happened despite having extra officers and increased security across the region because of the AFC championship game, which attracted visitors from across the country.

“We want to roll out the red carpet. We want Kansas City to be that place that they want to come to, that they enjoy and they had a great time at. The violent crime Achilles heel keeps coming up time and time again, ” said Smith, who implored citizens to co-operate with authorities to reduce violence in the city.

Also late Sunday, two people were shot to death and at least five were injured in an attack outside a bar in San Antonio, Texas. The suspected gunman was still on the loose Monday, police said.

In this image made from video, a police vehicle passes with sirens near the scene of a shooting, Jan. 20, 2020, in Kansas City, Missouri. Police say at least two people are dead and upwards of a dozen people may have been injured in a shooting outside a bar. (KMBC via AP)