Trump fights headwinds as he and Biden battle over Florida 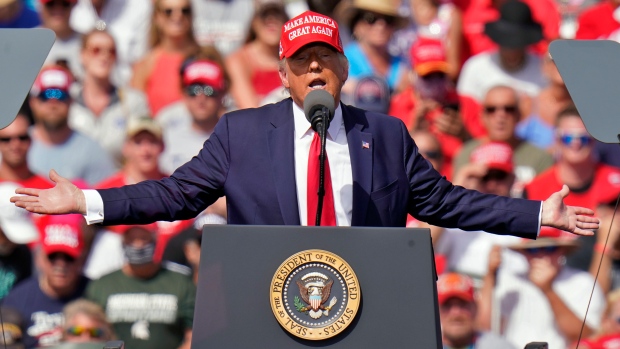 TAMPA, Fla. - Pressing against stiff headwinds from the pandemic, President Donald Trump steered toward what he hoped was safer political ground with the U.S. economy Thursday, as Democratic rival Joe Biden kept up his assault on Trump's handling of the coronavirus.

Campaigning hours apart in Florida, a state all but essential to the Republican's pathway to another term, both candidates urged supporters to get to polling places in person, even as a tropical storm interrupted early voting in the Southeast.

The shift to focusing on in-person voting next Tuesday - or sooner, where possible - comes as more than 80 million Americans have already cast their ballots, absentee or by mail. While the Election Day vote traditionally favours Republicans and early votes tend toward Democrats, the pandemic, which has killed more than 227,000 people in the United States, has injected new uncertainty.

“You hold the power. If Florida goes blue, it's over,” Biden told supporters Thursday.

Trump on Thursday was celebrating a new federal estimate that the economy grew at a stunning 33.1% annual rate in the July-September quarter - by far the largest quarterly gain on record - making up ground from its epic plunge in the spring, when the eruption of the coronavirus closed businesses and threw tens of millions out of work.

“So glad this great GDP number came out before November 3rd,” Trump tweeted, predicting a dire reversal if Biden is elected.

But economists warned that the economy is already weakening again and facing renewed threats as confirmed viral cases surge, hiring has slowed and federal stimulus help has mostly run out.

Biden said, “The recovery is slowing if not stalling, and the recovery that is happening is helping those at the top but leaving tens of millions of working families and small businesses behind.”

The Democrat is framing his closing arguments to voters on what he describes as responsible management of the COVID-19 pandemic. Trump, instead, is arguing that Biden would undo the economic gains of his administration with stricter, virus-targeting public health controls - though those are largely what scientists are calling for.

“The people are tired. They can't do it anymore,” Trump said of lockdowns.

Trump and Biden both visited the western end of the Florida's Interstate 4 corridor, an area known for rapid residential growth, sprawling suburbs and its status as an ever-changing, hard-fought battleground during presidential elections.

The president had been scheduled to hit another sunbelt battleground state, North Carolina, on Thursday evening but cancelled his event in Fayetteville as Tropical Storm Zeta brought wind gusts reaching 50 mph to the area.

Biden was forced to wrap his speech up early at a drive-in rally at the Florida State Fairgrounds In Tampa after a brief shower turned into a torrential downpour.

On Friday, Trump is to visit three upper Midwest states, and he will hold a trio of rallies Saturday in Pennsylvania before launching on a whirlwind tour of battlegrounds including Florida, Michigan, Georgia and Pennsylvania in the closing 48 hours of the race.

Biden, meanwhile, heads later in the week to three more states Trump won in 2016: Iowa, Wisconsin and then Michigan, where he'll hold a joint Saturday rally with former President Barack Obama. Biden's campaign also announced he will visit Minnesota Friday, hours before Trump holds a rally in one of the few Clinton-voting states Trump is hoping to pick up this year.

The pandemic's consequences were escalating, with deaths climbing in 39 states and an average of 805 people dying daily nationwide - up from 714 two weeks ago. The sharp rise sent shockwaves through financial markets, causing the Dow Jones Industrial Average to drop 900-plus points on Wednesday.

Trump is betting on the GOP's vast field and data operations, and efforts known as “poll flushing” - monitoring precinct lists for who has and has not yet voted - to provide a late boost on Election Day. The Republican National Committee, which has more than 3,000 field staff and claims more than 2.5 million volunteers, will use that information to reach out to Trump supporters to ensure they get to the polls.

Nowhere may those efforts be more important than in Florida. Without the battleground state's 29 electoral votes, Trump's path to victory is exceptionally difficult.

On Thursday, Trump was introduced in Tampa by first lady Melania Trump, who praised her husband's presidency, saying “under Donald's leadership, we have blocked out the noise and focused on you, the American people.”

Trump is banking on local news coverage of his visit to overcome a substantial advertising deficit stemming from a late cash crunch. Biden and his allies are outspending Trump and his backers by more than 3-to-1 in Florida - about $23 million to about $7 million - in the final push to Election Day, according to data from ad tracking firm Kantar/CMAG.

Biden, meanwhile, is pouring tens of millions of dollars into a torrent of online advertising that will deliver his closing message of the presidential campaign, highlighting his promise to govern for all Americans while blasting Trump's handling of the coronavirus pandemic.

“I will work as hard for those who don't support me as those who do,” Biden says in one of the digital ads, which took over the masthead of YouTube.com Thursday. “That's the job of a president - the duty to care for everyone.”

How much exactly Biden will spend is unclear. His campaign says it is putting a “mid-eight figure” dollar amount behind over 100 different ads, which means they could be spending as little as $25 million - but potentially much more.

The Republican National Committee, meanwhile, launched its closing message to voters Thursday, not mentioning Trump, in an apparent aim to help GOP candidates up and down the ballot with a focus on traditional Republican messages around lowering taxes and health care.

In both Hillsborough County, which includes Tampa, and the adjacent Pinellas County, Democrats are crushing vote-by-mail. As of Wednesday morning, 53,000 more Democrats than Republicans had voted by mail in Hillsborough. In Pinellas, the largest of the four counties in the state to switch from Obama to Trump in 2016, that number was just shy of 30,000.

Republicans in both counties have a slight edge in the state's in-person early voting, which began last Saturday as Trump himself voted in Palm Beach County downstate.

Because of concerns about submission deadlines, Postal Service backlogs and the potential for drawn-out legal challenges, Democrats are pressing their backers who have yet to return ballots to head to the polls in person.

The aftereffects of Hurricane Zeta were holding back voters at a number of polling places in northern Florida and northern Georgia that lost power. In Douglas County, in Atlanta's western suburbs, all six polling locations were without power, as were county offices.

Miller reported from Washington and Jaffe from Ft. Lauderdale, Florida. Associated Press writers Tamara Lush in Tampa, Florida, Michelle Price in Bullhead City, Kathleen Ronayne in Phoenix, and Will Weissert and Brian Slodysko in Washington contributed to this report.