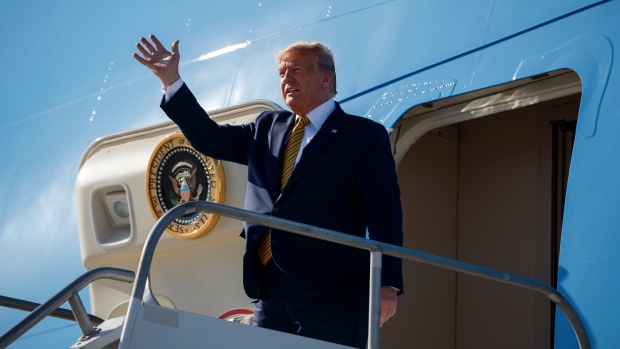 PORTOLA VALLEY, Calif. - President Donald Trump rarely passes up the chance to throw a sharp elbow at left-leaning California, but he showed Tuesday he's more than happy to cash in there with a lunch-dinner-breakfast-lunch fundraising blitz expected to scoop up $15 million from wealthy Republicans in two days.

“There's not been a president in living history that is as unpopular in the state of California as Trump,” said Mike Madrid, a GOP political consultant who is an outspoken Trump critic. “But our money spends the same as everyone else's.”

With protesters not far away, Trump kicked off his moneymaking Tuesday with a $3 million Bay Area luncheon, to be followed by a $5 million Beverly Hills dinner at the home of real estate developer Geoffrey Palmer. He'll bring in an additional $7 million on Wednesday with a breakfast in Los Angeles and luncheon in San Diego.

About 100 protesters lined the road about a mile from Trump's luncheon site in Portola Valley, with demonstrators inflating giant Baby Trump and Trump Chicken balloons.

Republican National Committee member Harmeet Dhillon of California said about 400 guests attended the fundraiser at the home of Sun Microsystems co-founder Scott McNealy, where the president spoke for about 45 minutes then took questions from the crowd.

Talking to reporters aboard Air Force One, Trump got in some fresh digs about the state's problem with homelessness, saying, “We can't let Los Angeles, San Francisco and numerous other cities destroy themselves by allowing what's happening.”

“The people of San Francisco are fed up, and the people of Los Angeles are fed up. And we're looking at it, and we'll be doing something about it,” he added.

Los Angeles Mayor Eric Garcetti, a Democrat, said ahead of Trump's arrival that he hoped the president would work with the city to end homelessness. He said he had not been invited to meet with the president.

California was an incubator for the modern conservative movement that swept the state's former governor, Ronald Reagan, into the White House in 1980. But demographic changes and an influx of new residents have helped drastically rework the political contours of the country's most populated state, with the former GOP stronghold of Orange County now home to more registered Democrats than Republicans.

For Republicans, who have been resigned to political irrelevance at the state level, a donation to Trump can amount to its own form of protest.

“By showing up to a fundraiser deep in the belly of the beast, one is saying: 'I don't care what the liberal politicians are saying and I want to show my support for him publicly,”' said Dhillon, an ardent Trump supporter who said she lined up four tables of donors for the Silicon Valley event.

She said the president's stopover delivered a jolt of energy for California Republicans, who live in a state where Democrats dominate state politics.

“It's been amazing for morale. All the California Republicans ... left energized,” Dhillon said.

California has long been a key fundraising hotbed for politicians of both parties, which have relied on the entertainment industry and wealthy industry heads to finance their political ambitions. But under Trump, the run-of-the-mill fundraising trip has taken on a complicating dimension because of his harsh criticism of the state's immigration laws and its forest management practices, which he blamed for fatal wildfires.

Earlier this month Trump lashed out at “Will and Grace” TV star Debra Messing after she tweeted that attendees of the Trump's California fundraisers should be outed publicly.

Trump tweeted back: “I have not forgotten that when it was announced that I was going to do The Apprentice, and when it then became a big hit, helping NBC's failed lineup greatly, â†•DebraMessing came up to me at an Upfront & profusely thanked me, even calling me ”Sir.“ How times have changed!”

Overall, Trump continues to rake in gobs of cash more than a year out from the November 2020 contest, with his campaign and the Republican National Committee pulling in more than $210 million since the start of 2019, Federal Election Commission records show. That's more than all the current Democrats seeking to replace him raised combined during that period.

The visit this week marks Trump's fourth visit to the state during his presidency.

A protester holds a sign near the U.S. House Republican Member Retreat, Thursday, Sept. 12, 2019, in Baltimore, where President Donald Trump was scheduled to speak later in the day. (AP Photo/Nick Wass)