Trump v. Biden: 'tool of the radical left' against 'a battle for the soul of America' 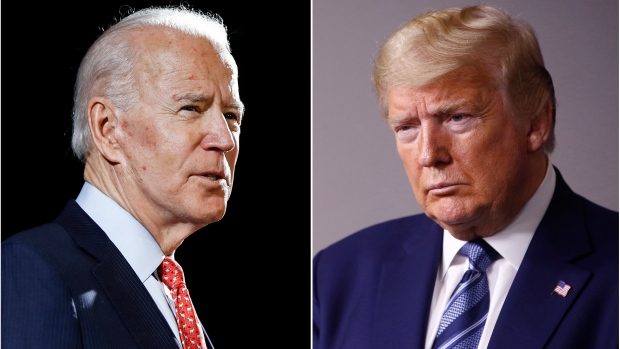 FILE - In this combination of file photos, former Vice President Joe Biden, left, speaks in Wilmington, Del., on March 12, 2020, and President Donald Trump speaks at the White House in Washington on April 5, 2020. Some of the country’s major sports betting companies are running contests in which participants predict things that will happen or be said during the presidential debate, Tuesday, Sept. 29, 2020, for the chance to win money. (AP Photo/File)

WASHINGTON, Wash. - Never mind “David and Goliath”- tonight's debate between Joe Biden and Donald Trump sounds more like the fable of the tortoise and the hare.

Trump is shrugging off questions about his preparations, insisting that being president of the United States has him ready for anything.

Biden, his Democratic challenger, has by all accounts been working hard on his debate prep, despite his campaign's efforts to lower expectations.

As the first face-to-face showdown of an election season like none other, it promises to be quite the spectacle.

There will be a small audience at the venue at Case Western Reserve University in Cleveland, and everyone in the building will have to pass a COVID-19 test.

Topics for the 90-minute debate include the pandemic, the economy, the Supreme Court, social justice issues and the integrity of the voting process.

Neither candidate will be required to wear a mask, but Trump and Biden will skip the customary pre-debate handshake.

“He's decided to forgo the traditional debate preparation, and I guess that means that he will continue as he does in the so-called coronavirus daily briefings or his Trump rallies,” said Mitchell McKinney, a professor of communication at the University of Missouri and an expert on presidential debates.

“It's going to be kind of stream-of-consciousness, shoot from the lip, make any claim â¤ whatever comes to mind.”

Asked whether he's taken part in any mock debates, a ritual for political leaders, Trump waved a hand at former New Jersey governor Chris Christie and former New York mayor Rudy Giuliani, suggesting they have been standing in as his Democratic rival.

But the overriding sense during Sunday's news conference was of a president determined to wing it.

“A little time â¤ I mean, not a lot,” he said of his debate prep, suggesting at once that he's been too busy and also that he doesn't want to be overprepared.

Both candidates will be focused less on each other than on connecting with the voters who will decide their fates, said Karen Beckwith, the Flora Stone Mather professor in CWRU's political science department.

And with the United States is as divided as it's ever been, new voters â¤ those who weren't old enough to cast ballots in 2016 â¤ are likely to play an outsized role.

“It's who will turn out, and where. And that's one of the big things that both candidates will be addressing â€¦ to try to capture their own constituencies to encourage turnout and to encourage support from them.”

Trump has made clear he wants to portray Biden as a doddering oldster in a state of mental decline and a puppet of radical progressives.

The number of COVID-19 deaths in the U.S., the highest of any country on the planet, is closing in on 210,000, with the world on the cusp of a second wave. Unemployment is hovering at 8.4 per cent, up from historic lows but with analysts bracing for another downturn.

An explosive New York Times report paints a picture of Trump as a struggling, debt-addled businessman who paid just $750 in taxes in 2016 and 2017, owes $300 million in loans and wrote off more than $70,000 for hair styling during his tenure on “The Apprentice.”

And Trump's own musings about the integrity of the coming vote and apparent unwillingness to permit a peaceful transition should he lose, fuelled by baseless claims of looming mail-in ballot fraud, have experts describing him as an existential threat to American democracy.

On Sunday, when asked how he would counter Republican efforts to fast-track the Supreme Court nomination, Biden refused to take the bait.

“You're not going to like my answer,” he said.

“What I'm not going to do is play the Trump game, which is a good game he plays - take the eye off the issue before us.”