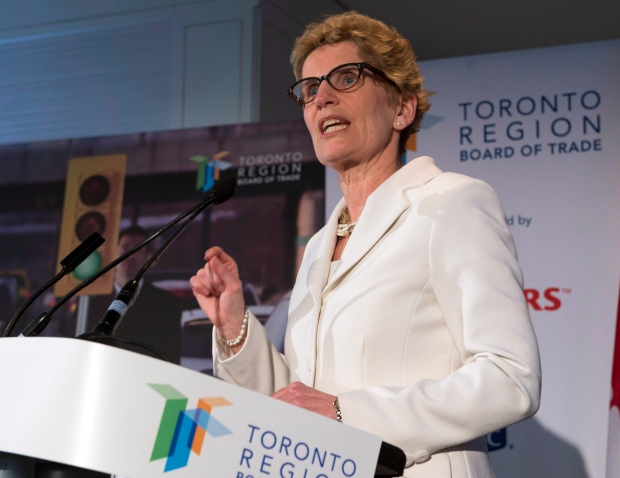 Ontario Premier Kathleen Wynne speaks at the Toronto Region Board of Trade in Toronto on Monday April 8, 2013. (Frank Gunn/ THE CANADIAN PRESS)

"What we know is that the property tax base cannot pay for all of the transit infrastructure that's needed in the GTHA," she said in an interview with The Canadian Press.

"So that really is part of the motivation for saying we need a dedicated revenue stream other than that."

Municipal politicians outside Toronto have been concerned about a tax hike to pay for improvements to services their residents don't use.

Some people who live outside the GTHA do work or visit the area, she said. But others in places like northern Ontario are more concerned about roads and bridges, which also need funding.

Wynne suggested that the province will focus on getting revenue for transit from the people who are using that infrastructure.

"It's the people who live, work, play, who are part of the GTHA who ... will benefit from increased transit spending, that's the group of people to whom I'm talking about that dedicated revenue stream for the GTHA," she said.

Metrolinx, the provincial transportation authority, has suggested other ways to raise the billions of dollars that they say is needed to reduce congestion and promote economic growth.

They include a sales tax hike, highway tolls and a half-cent-a-litre tax on gasoline -- suggestions Toronto Mayor Rob Ford found so distasteful last week that he pretended to vomit.

"People are very frustrated with the congestion. There's no doubt about that."

Wynne, who said she'll make it part of her campaign platform if there's an election, said she's not afraid to spend some political capital to get the region moving again.

"Yes, there is a political risk to take on this issue," she said. "But there's a societal risk to not taking it on."

Doing nothing about something that's so important would be abdicating her responsibility as premier to make people's lives better, Wynne said. Better transit will also spur economic growth in the region.

"I see it as a responsibility of mine to tackle this issue."

Progressive Conservative Leader Tim Hudak has left the door open to new levies to fund transit, but says the government should trim the fat in their own budget before asking taxpayers for more money.

Wynne said she'll consider all the options but won't make a decision until she looks at Metrolinx's final report in June.