'You got me,' Canadian murder suspect tells German police

A Canadian man who is accused of dismembering his murder victim and mailing body parts to political parties has been arrested in Germany, police confirm to CP24.

Stefan Redlich, an English-speaking spokesperson for the Berlin police department, told CP24 that they were "positive" they had suspect Luka Rocco Magnotta in custody.

"We arrested him today," he said.

Police said Magnotta, who is originally from Toronto, was arrested at around 2 p.m. local time at an Internet cafe in the Neukolln District -- an area that is popular with students and is known for being a hot-spot for cheap bars.

Seven police officers arrived at the cafe and once they verified the suspect's identity, they made the arrest.

A worker at the Internet cafe told CNN reporter Diana Magnay that the suspect was on a computer looking up websites that contained his photo. The worker recognized the suspect from photos distributed in international news reports and immediately contacted authorities.

Redlich said that Magnotta at first tried to give officers a false name but police kept insisting he was lying.  Magnotta eventually said, "You got me."

Redlich said the department was making efforts to speak with their federal police service, who would then contact Canadian authorities.

Magnotta was in the process of being brought to one of Berlin's prisons at the time CP24 spoke to Redlich at 11 a.m. EST.

"He will be held until all of the questions will be answered in terms of who is looking for him," he said.

Redlich confirmed that Magnotta would make a court appearance on Tuesday.

Magnotta allegedly fled Montreal and arrived in Europe on May 26. He was spotted in Paris over the weekend.

The suspect is also accused of mailing the victim's body parts to Canadian political parties. The gruesome murder came to light after a staffer working at the Conservative Party headquarters in Ottawa opened up a package that was delivered to the office. Police later said the package was stained with blood and contained a human foot.

Police later intercepted another package meant for the Liberal Party which contained a human hand. The victim's torso was found in a discarded piece of luggage in Montreal. DNA testing confirmed the body parts belonged to the same person and police were able to positively identify the victim.

Soon, there were rumours that the suspect filmed the murder and posted it on the Internet. Police told the media that they had seen the video and believed in its authenticity.

The video, which is nearly 11 minutes long, shows a suspect, wearing all black with his face disguised, killing a naked man who is tied up on the bed. At first the victim's face is also covered. The video is a gruesome depiction of a violent murder, cannibalism and disturbing sexual assault.

Magnotta is wanted for first-degree murder, committing an indignity to a body, publishing and mailing obscene matter and harassing Prime Minister Stephen Harper along with other members of parliament.

Harper, who is in London for the Queen's Diamond Jubilee, offered his congratulations to police in Berlin for making the arrest. 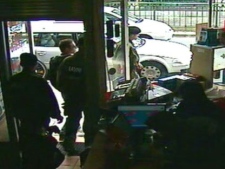 This image taken from CCTV obtained by Associated Press video shows Luka Rocco Magnotta, 2nd left, being removed by police from the Internet cafe in the district of Neukoelln in Berlin, Germany, on Monday, June 4, 2012. (AP Photo/AP Video)