Toronto's city manager confirmed Tuesday that 17,000 employees will be offered a buyout late this summer.

Employees who are members of a union will be eligible to receive three weeks pay per year of employment while management would be offered four weeks pay for every year they've been employed by the city.

However, the separation payment will be capped at six months, even if the employer put in eight years of service, City Manager Joe Pennachetti told reporters at a news conference Tuesday afternoon.

"If the position is more important to continue, we may have to carry on with the employee or want that position to be maintained," Pennachetti said.

City workers have until September 9 to apply for the buyout. The employees will be able to leave their positions between October and December 2011.

Pennachetti said a special council meeting would be held at the end of September to deal with the number of applicants willing to take the buyout.

Council will also deal with the core service review recommendations at that time.

Rumours of a buyout swirled early this morning after a report surfaced in the Globe and Mail saying the city was looking to dismiss 50,000 workers.

But Pennachetti said the newspaper report was incorrect and was the result of an unauthorized release.

"This is not how I planned to make it available to the Toronto public service," he said, addressing staff members during the news conference. "I offer my sincere apologies for this break of information. You should be receiving information through the city manager, and not the media."

But union officials were nonetheless incensed at the news.

The union representing municipal employees said the massive buyout is "discrimination at a basic level."

Instead of a buyout, the city would find more success with natural attrition over the next few years, said Mark Ferguson, president of the Toronto Civic Employees Union, Local 416 of the Canadian Union of Public Employees.

Ferguson said he doesn't think many employees will take a buyout.

"It is purposely voluntary so the employee can make their own choice," he said. They have a few months to consider the opportunity."

Ferguson said union officials got wind of the proposed buyout when they met with city representatives recently.

Ferguson said the union wanted to have "meaningful consultations" with the city before the packages were offered, but that didn't happen.

More than $4.6 billion is currently spent on salaries and benefits. Toronto council is wrestling with a projected $774-million budget shortfall. 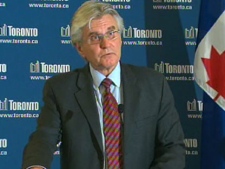