The "Zombieland" star wanted to work out the kinks with an extensive workshop and then launch the piece in a creative, welcoming environment. He settled on his "favourite city in North America" -- Toronto.

"I was thinking about the amazing time I had when I came here doing 'This is Our Youth,' which I did for two consecutive summers -- the second because it was so much fun the first summer," Harrelson says in a recent interview, referring to 2003 and 2004, when he directed the Kenneth Lonergan script.

"If you're wanting to try a play out and not be in New York where the spotlight would be even 100 times more intense, I think it's a great place because it's a town that really knows theatre and gets into theatre and has a respect for theatre.... I can't think of many other places in North America that have this level of theatre and theatre interest."

Seated onstage at a downtown community centre where "Bullet For Adolf" has been rehearsing, Harrelson gushes over local shows he's seen since setting up camp in Toronto. They range from the acclaimed production of "Barrymore" starring Christopher Plummer to the soaring Mirvish musical, "Billy Elliot," to the one-woman play "Mahmoud."

But it's clear his affection for Toronto extends far beyond the theatre scene. Harrelson also rattles off favourite local haunts, including a downtown yoga studio, a raw food restaurant and the clothing store Roots.

Perhaps the clearest indication of how much he's embraced the city comes when the interview concludes -- he lingers at the community centre to meet up with a neighbourhood chess club and plays a few rounds.

On Thursday, Harrelson will offer fans a hint of upcoming projects with an appearance at TIFF Bell Lightbox to discuss his varied career in front of an audience.

Fun and games aside, Harrelson admits to feeling more than a little pressure as he hammers out the final details in "Bullet For Adolf," which he directs and co-wrote. The comedy is inspired by the summer after college when he worked construction in Houston.

"It's definitely a big deal for me," says Harrelson, who estimates he only had two-thirds of the script mapped out when he began workshopping the play.

"I'm really hoping people like it. And if they hate it, I don't know. Depression is going to happen for me."

"Bullet for Adolf" revolves around eight characters who come together during the hot Houston summer of 1983. It's billed as a "comedy about opinions, ideas and friendships."

"There's a character based on me. Hopefully when you watch it you'll be able to figure it out, or hopefully not, maybe. It's not the most flattering (portrait)," says Harrelson.

The play is co-written by longtime friend Frankie Hyman, whom Harrelson met that summer and made a lasting impact on the actor.

"He was, like, really the second black dude I had really ever hung out with and I was the second white dude he'd hung out with so there was a lot to learn about people's perspectives, philosophies. A little bit of that's in the play but mostly it's just good strong comedy," Harrelson says in his laid-back southern drawl.

"It's a play that brings together a ... very diverse group of people. And then the inciting incident is there is an old artifact that is stolen and people are trying to figure out who took it. But I guess if you asked me what the play is about, it's really about making you laugh."

The artifact is an old Luger that was owned by Hitler and also used in an attempt to kill Hitler, he says. But that aspect is tangential to the story, Harrelson insists.

"To be perfectly frank we wanted to come up with a title that people wouldn't forget. So that's why we got this title. It might be a bit of a stretch to use it," he admits.

It wasn't long after that Houston summer that Harrelson got his breakout role as the sweet but dim-witted bartender Woody Boyd on the long-running sitcom, "Cheers."

Throughout, an interest in writing has been a constant thread.

"When I was a kid my teacher told me, 'You're going to be a writer,"' the Texas-born Harrelson says.

"And then of course she was kind of wrong. But I do, I always write. I've always been writing. I have a real interest in it and I just never really did it professionally."

"I've got three screenplays three-quarter written, each one. That's where I get -- I get about three quarters...and then I just kind of let it go," he says, blaming a lack of discipline on sheer laziness.

If he could, Harrelson says he'd love to be able to mount a play a year.

The 49-year-old, who famously led hundreds of people in a massive outdoor yoga session at the University of Toronto in 2003, says he's grateful that his career has been varied enough to allow him to pursue his whims.

"I feel lucky to not be boxed in by genres, which is cool," says Harrelson, whose other theatre stints have included starring roles in London's West End throughout the 2000s.

"Bullet for Adolf" holds previews April 19 and officially opens April 21. It runs through May 7. 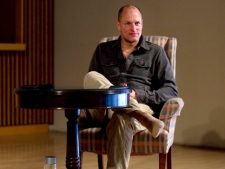 Hollywood actor Woody Harrelson is pictured during an interview in Toronto on Monday, March 28, 2011, as he discusses his new play 'Bullet for Adolf' which he has co-written and will direct. (THE CANADIAN PRESS/Chris Young)