Arrest made after cyclist suffers serious injuries in hit and run

An arrest has been made after a male cyclist suffered serious injuries in a hit and run near Dupont Street and Dovercourt Road on Tuesday evening.

Emergency services says the victim, between 25 to 35 years-old, suffered a head injury after 7 p.m., and he was transported to hospital.  The man's condition has been upgraded to not life-threatening.

Toronto police say an arrest has been made after a female driver fled the scene. She was arrested two blocks from the scene and is facing impaired driving and failure to remain charges.

Investigators say the SUV was travelling northbound when the cyclist was hit.

Dovercourt Road is closed in both directions between Dupont and Geary Avenue. 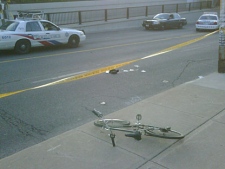 A cyclist has been seriously injured in a collision with a vehicle on Tuesday evening. (CP24/Jee-Yun Lee)