B.C.'s Prince of Pot surrenders for extradition to U.S. 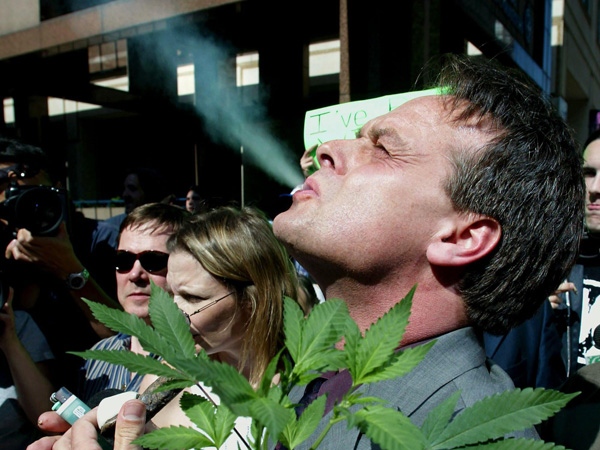 Cannabis crusader Marc Emery, of Vancouver, smokes marijuana as he holds a plant at a gathering of pro-marijuana legalization supporters outside police headquarters in Toronto June 19, 2003. (CP / Kevin Frayer)

VANCOUVER - After flouting marijuana laws for decades, British Columbia's so-called prince of pot turned himself in to authorities Monday to face extradition to the U.S.

But Marc Emery was defiant until the end.

"Plant the seeds of freedom. Over grow the government everyone," Emery yelled as he was led away by sheriffs at the B.C. Supreme Court in downtown Vancouver.

His wife Jodie Emery wept during the short court process where Justice Anne MacKenzie committed Emery for surrender to the United States.

Earlier this month, Emery reached a plea agreement to serve a five-year prison term for selling marijuana seeds to American customers. The next step is for the federal justice minister to order his surrender.

But before he surrendered himself, Emery told supporters and a horde of media outside the court that he was hopeful the minister wouldn't approve the extradition.

"And if they do sign they must be punished in the next election," he said.

If that doesn't work, Emery is hoping he'll be transferred to serve his time at home under an agreement between Canada and the United States that allows prisoners to serve their time in their home countries.

"I would be out on the street with you a year from now if I'm transferred back to Canada as a non-violent first offender in the federal system."

He conceded that the Conservative government has so far refused to repatriate any Canadian convicted in the United States of a marijuana offence.

"That bodes poorly for me," Emery told reporters.

He doesn't deny selling the seeds to U.S. customers -- in fact, he said he did so deliberately.

"I'm proud of representing the cannabis culture," he told the crowd outside the courthouse.

"There's no crime ... the crime is we have a government that continues to hand a huge business over to the underground, the criminal element as a matter of public policy."

He said politicians who support marijuana prohibition are supporters of organized crime.

Jodie Emery told the crowd she was devastated her husband was going to prison and furious with the Canadian government.

"Help bring my husband back home to me please," she said, weeping.

She said her husband is a political prisoner because when he was arrested on the U.S. charges, the American prosecutor issued a news release saying the arrest was a significant blow to the marijuana legalization movement.

"When you consider that there are people moving tones of cocaine and damaging harmful drugs and weapons . . . this is insulting," she said.

"Nobody should go to prison for a plant."

Two of Emery's co-accused, Michelle Rainey and Greg Williams, were sentenced to two years probation in a Seattle court last July for helping Emery mail the pot seeds to the U.S.

Emery is hoping his supporters will make it "politically unpalatable" to keep him incarcerated.

Emery has run for political office under the Marijuana Party banner and has taken part in protests across the country in an effort to decriminalize pot.

He's been arrested more than a dozen arrests across the country because of his marijuana activism, and spent a three-month stint in Saskatoon Correction Centre.

"I didn't like being there while I was there, but I had many epiphanies and revelations about myself," he said.

"So I hope I can make good use of that time in more awkward circumstances in the United States."