Bride gets jail time after faking cancer for wedding fund

GOSHEN, N.Y. - A New York woman who faked having cancer so donors would pay for her dream wedding and Caribbean honeymoon has been released from jail.

Jessica Vega left the Orange County Jail in upstate New York a few hours after being sentenced Wednesday to the nearly two months she had already served.

A prosecutor says she paid back more than $13,000, as required under her plea agreement.

Her May 2010 wedding dress, the wedding rings and the Aruba honeymoon were donated by people taken in by her cancer claim.

Vega apologized in court and said she wanted to get back to her two children.

Her ex-husband, Michael O'Connell, says she will live with his family. 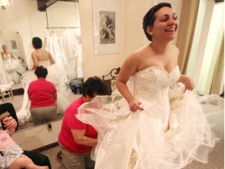 In this April 8, 2010 photo, Jessica Vega tries on the wedding gown at Bella Coutre, in Newburg, N.Y.(AP/Times Herald-Record, Jeff Goulding)