Canada prepares to send navy warship to waters off Libya

OTTAWA - Canada will send a warship to Libya, adding to the international military buildup in the region, Prime Minister Stephen Harper said Tuesday.

"I am proud that the Charlottetown will rapidly be joining Canadian and allied forces to participate in this effort in Libya," Harper told the House of Commons.

News of the short-notice deployment came on the same day as a Canadian military Hercules transport, en route to pick up stranded oil workers, was turned back from Libya.

The British have used one of their frigates -- HMS Cumberland -- to evacuate its citizens from the port city of Benghazi.

A spokesman for the Ottawa-based overseas headquarters confirmed an air force C-130J Hercules was waved off its mission on Tuesday about half way between Malta and the troubled north African nation.

The transport was headed into Tripoli.

"The reason for the denial is apparently due to a shortage of ramp space at Tripoli International Airport," said Maj. Andre Salloum, spokesman for Canadian Forces Expeditionary Command.

It's the latest in a string of setbacks for the Canadian evacuation effort.

A Canadian C-17 military transport was last week denied landing rights in Libya and sat on the tarmac in Rome before beginning flights over the weekend.

And at least two civilian aircraft chartered by the Foreign Affairs Department left the chaotic north African country with no passengers.

The empty Hercules, one of the newer models purchased by the Conservative government, has returned to Malta where the air force has stationed one other C-130 and two giant C-17 transport planes.

Salloum said another flight is scheduled for Wednesday.

"Canada's military aircraft have made trips into Libya to deliver supplies and rescue Canadian and other citizens. Those flights continue."

A military reconnaissance team and combat medics are also in Malta, evaluating what else the military can deploy to aid in the evacuations.

It's not clear what company employed the oil workers the Hercules was trying to evacuate.

The federal government has already evacuated citizens as well as a number of foreign nationals. Ottawa closed its embassy in Tripoli a few days ago and has set up a satellite diplomatic post in Malta.

Prime Minister Stephen Harper was on the telephone Tuesday with his counterpart in Malta, Lawrence Gonzi, and thanked him for hosting Canadian Forces.

A spokesman for the prime minister, Dimitri Soudas, said the two leaders also talked about the need to further deter violence by the Libyan regime against its own citizens.

Foreign Affairs Lawrence Cannon told the UN Human Rights Council in Geneva that the world must focus on the unfolding "humanitarian crisis" and said Canada was willing to provide assistance. But he didn't say what form that assistance would take.

Calgary-based Suncor Energy has the biggest Canadian commercial presence in Libya, but said a statement last week that most of its expatriate staff and their families had left the country.

Pure Technologies, also based in Calgary, is said to be organizing to get its staff to safety. 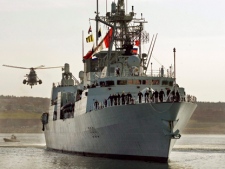 A Sea King helicopter escorts HMCS Charlottetown on the waterfront in Halifax on Wednesday, May 7, 2008, after it returned from a six-month tour of the Persian Gulf. The Canadian navy is sending HMCS Charlottetown to the waters off Libya. (THE CANADIAN PRESS/ Andrew Vaughan)