Chicago preparing for life without Oprah after 25 years

CHICAGO - Before Oprah Winfrey looks west to Los Angeles and her new cable station the talk show queen finds herself saying goodbye to her beloved Chicago.

"It feels like Scarlett leaving Tara," Winfrey told The Associated Press in December before the Oprah Winfrey Network's launch.

"When I first flew into Chicago on Labor Day 1983 to audition for 'A.M. Chicago,' I remember thinking when I left the city that if I don't get the job I'm gonna find a way to get back because I just love the city," she said.

Winfrey came to Chicago in 1984 to WLS-TV's morning talk show, "A.M. Chicago." A month later the show was No. 1 in the market. A year later it was renamed "The Oprah Winfrey Show."

During those early days Winfrey had a small corner office with two rows of desks where her producers sat, remembers Joel Daly, a retired longtime news anchor for the ABC affiliate.

"You'd go down after her show and she'd be walking around in a bathrobe and slippers," Daly said.

Winfrey outgrew those quarters, getting more studio space until she opened Harpo Studios on Chicago's West Loop neighbourhood in 1990.

"We moved here 10 years ago to a section of Randolph Street that was pretty desolate, but it always felt safer because we knew Harpo was down the street," said Ina Pinkney, who owns the breakfast and lunch restaurant Ina's.

Winfrey is often given credit for transforming the once-gritty industrial enclave to a neighbourhood filled with families pushing strollers and walking their dogs.

"When I told people I was down the street from Oprah that was enough when you invoke her name you invoke a magic," Pinkney said. "She took a stand and she made this neighbourhood what it is."

Art Smith was once Winfrey's personal chef, a job he earned after cooking lunches for Winfrey at Harpo. He now is executive chef and co-owns Chicago's upscale Southern restaurant Table fifty-two.

"You can't go any place in the world that doesn't know who Oprah Winfrey is or Chicago," Smith said. "She's been such an important part of the fabric of the city."

Winfrey was visible in Chicago, shutting down Michigan Avenue in September 2009 to film her season premiere with the Black Eyed Peas.

"Isn't this the most fabulous city in the world?" Winfrey yelled to more than 20,000 fans who crowded Chicago's Magnificent Mile.

Winfrey walked outside a Gap store with U2's Bono and brought more than 170 American Olympians to the city's Millennium Park. She lobbied for Chicago in the city's unsuccessful bid to host the Olympics.

"Only Oprah can close down Michigan Avenue and make it not feel like a local event," said Melody Spann-Cooper, president of WVON and WRLL radio stations in Chicago. "She really put a spotlight on us in a way that nobody else could."

Winfrey didn't have to do give Chicago the exposure, said outgoing Mayor Richard Daley.

"She could have went to L.A, she could have went any place but she's in Chicago," he said during a news conference this month after his last city council meeting. "She's a wonderful citizen of our city. We're very proud of and proud of her contribution."

Those contributions include $150,000 to sponsor a room for dogs at the animal shelter PAWS Chicago after Winfrey's beloved cocker spaniel Sophie died.

"I don't think of her of leaving Chicago," PAWS founder Paula Fasseas said. "I just think her universe is expanding. She's so much the heart and soul of Chicago, how she came here as unknown and became one of the most successful women in our world today."

"Oprah seems like someone who isn't going to just leave," Pinto said. "She could have gone anywhere. She could do what she does anywhere."

But Winfrey, a billionaire, didn't move her show to a coast when her success skyrocketed.

"I think she stayed here because it wasn't a bubble for her," Pinkney said. "Because when she walked her dog she saw real people in the park. When she went to a restaurant real people were there. Here she really had a life and I think that connection was important to her."

"If Chicago didn't respect her and love her she would feel that and have gone a long time ago," she said.

Though now there are outward signs Winfrey is leaving. The Oprah Store, across the street from her studio, is closing next month.

Winfrey told Fortune magazine in the fall that she planned on keeping only a small part of her 13,000-square-foot apartment off Michigan Avenue. And Rosie O'Donnell is to begin taping her talk show for OWN at Harpo Studios.

On Wednesday, Daley named the street outside Harpo Studios "Oprah Winfrey Way" and earlier this month she was inducted into the Illinois Broadcasters Association's Hall of Fame.

The truth that will slowly emerge in Chicago is that Winfrey won't be present taping talk shows every day. There will no strategy sessions about nabbing Oprah tickets or gossip about seeing the talk show queen out on the town.

Can the city recover from her absence? Will this be like San Francisco without its cable cars? Like Philadelphia losing the Liberty Bell?

Will Chicago feel diminished in a post-Oprah era, the way Brooklyn felt when the Dodgers bolted to Los Angeles?

Not according to Smith, her former chef, who believes Oprah and Chicago will never really part. 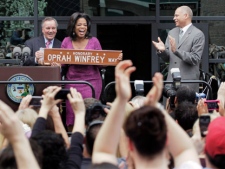 In this photo taken May 11, 2011, fans applaud as talk-show host Oprah Winfrey is honored with a street named for her outside her Harpo Studios in Chicago by Chicago Mayor Richard M. Daley, left, and Bobby Ware, commissioner of the Chicago Department of Transportation. Winfrey's talk show, which has taped in Chicago for 25 years, ends May 25, 2011. (AP Photo/M. Spencer Green)