CHICAGO - What do you get the woman who has everything and has given away just about everything?

Daley, who will leave office next week after more than 22 years, honoured Winfrey by naming a block in front of Harpo Studios "Oprah Winfrey Way." Winfrey is ending her own two-decade-plus run as host of her Chicago-based television show.

"Your presence in Chicago has been a gift ..." Daley said, moments before the cover was pulled off the sign that stands in front of the studio's main entrance, calling Winfrey "a great ambassador for our city."

Winfrey was equally effusive about Daley and her adopted hometown.

"I just want to say thank you to the mayor and also to the city of Chicago for embracing me and allowing me to take a stand and make a stand here in this city," said Winfrey.

Winfrey is the latest of well over 1,200 celebrities, religious leaders, activists and others who have been honoured with street signs in Chicago. The list includes Michael Jordan, Siskel and Ebert, Frank Sinatra -- who has two -- and the geniuses behind Chicago-style hot dogs and pizza.

More than 100 people crowded onto the block and dozens more stood behind police barricades that blocked both ends of the street in one of the best attended ceremonies since the city started honouring people with the signs in the early 1980s.

Winfrey, who is taking her talk show off the air later this month after 25 years, launched her own Los Angeles-based television network a few months ago.

Winfrey told the crowd about coming to Chicago in 1984 to host a morning talk show, "A.M. Chicago," and how she fell in love with the city and decided quickly that if she didn't get the job she would find a job, perhaps in advertising, just so she could stay.

Winfrey said having a street named after her was "better than an Oscar or an Emmy."

"It is really just a full circle, miracle story," she said, "that a little colored girl born in Kosciusko, Mississippi, on a red dirt road ends up with my name on a street in the greatest city in the world, Chicago." 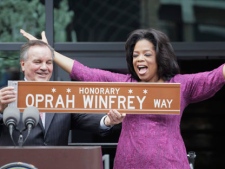 In one of his last acts before leaving office next week, Chicago Mayor Richard M. Daley presents TV talk-show host Oprah Winfrey with a sign after a street was named in her honor outside her Harpo Studios in Chicago, Wednesday, May 11, 2011. Winfrey will end her 25 year-run on daytime television in Chicago on May 25. (AP Photo/M. Spencer Green)