OTTAWA - The orange surge has put the New Democrats squarely in Conservative crosshairs.

A new Tory attack ad goes after NDP Leader Jack Layton for signing on to a 2008 coalition deal with the Bloc Quebecois.

The spot is similar in substance and tone to previous Tory attacks on the Liberals' Michael Ignatieff.

Black-and-white images of Layton and Bloc leader Gilles Duceppe are set among shadows in the ad as a sneering narrator intones that the NDP chief is driven by blind ambition.

The ad comes as polls suggest the New Democrats are gaining momentum -- particularly in Quebec -- as the campaign enters its final full week.

Some polls put the NDP ahead of the Liberals and Bloc Quebecois in Quebec.

The NDP have held a news conference in Ottawa to respond to the Conservative ad -- demanding that it be yanked because it is based, in their view, on false information.

The ad begins with the narrator suggesting that Layton's lust for power knows no bounds: "They say ambition can be blind. Just ask the NDP's Jack Layton."

It ends with a stark warning to voters: "Jack Layton and his coalition with the Bloc Quebecois: He did it before, he'll do it again. And Canada will pay the price."

All federal parties appear worried that they might pay a political price if the NDP continues its rise in the polls.

New Democrats -- often ignored by their rivals at election time -- are suddenly being attacked vigorously from all sides.

Bloc Quebecois Leader Gilles Duceppe warned voters in his province not to be suckered in by Layton's smile.

The Bloc leader, usually a friendly ally of Layton's in Parliament, cranked up his attacks on the New Democrat as someone who is out of touch with Quebecers on many issues.

"I am inviting Quebecers to reflect, to discuss this, and look beyond the image. To not vote for a mirage but for a party, the Bloc Quebecois, that is the mirror of Quebec society."

The Liberals, who have consistently tried making this election an either-or struggle between them and Stephen Harper, now have an added obstacle on their path.

One Conservative source says the party would stand to make gains as the result of an NDP rise.

He conceded that such an occurrence could also cost the Tories seats in some pockets of the country -- like B.C., Saskatchewan, and parts of Ontario.

That being said, he added that for the most part the ongoing trend is helpful to the Conservative party.

Long lineups were being reported at some polls -- with half-hour waits at one station in Montreal's Outremont, the one riding in Quebec currently held by the NDP.

Those advance polls will continue through Monday.

The polls being run on the holiest days of the Christian calendar raised concerns with the Canadian Conference of Catholic bishops.

Bishop Pierre Morissette says a number of Catholics who are Elections Canada staff and volunteers were concerned about being required to prepare or staff polling stations on those days.

But Elections Canada says it doesn't determine the dates for advance polls, rather that they flow from legislative requirements. 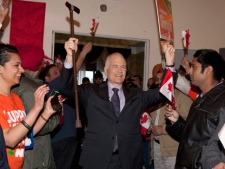